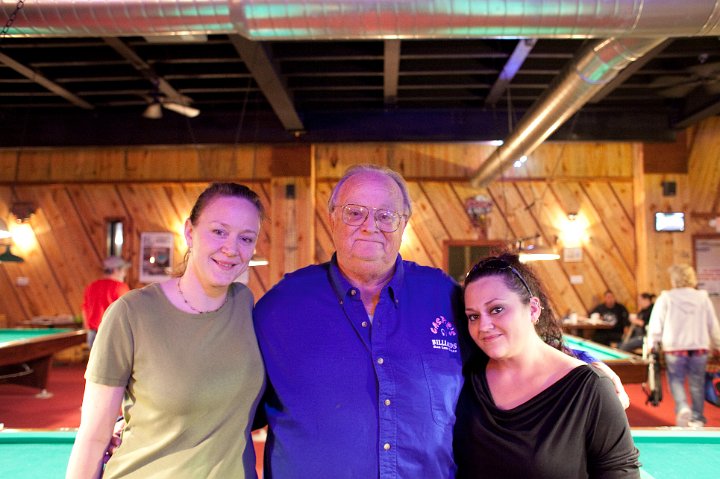 It was a smashing weekend November 13th & 14th at Casper’s Billiards in San Leon, Texas.    The weather was just how we liked it”¦..rainy and cool, prime conditions for being indoors and playing 9-ball all weekend long.  Casper’s Billiards is like no other pool room on our tour.  The food menu offers a wide variety of seafood specials, delicious sandwiches, steaks, burgers, etc. to whet everyone’s hungry appetite.   Kathy and Roy Robinson, owners of Casper’s and voted one of the best billiards rooms in the country, served as our host site in March as well as our Championship Stop during 2010.  All of our OBCLT family, friends, supporters always enjoy their time there and looks forward to the next time we will meet again.  Thank You, Casper’s for being part of our OBCLT family.

The OB Cues Ladies Tour (formerly Hunter Classics Amateur Tour) has been in existence for 18 years now.  Our main title sponsor, OB Cues, who took over sponsorship in 2008, owned by Don Owen and Royce Bunnell were also in attendance at Casper’s.  Don & Royce received special recognition from the players for allowing us to continue to pursue our dream and enjoy our passion, as well as providing us a special venue to further develop our extended family and friends by keeping the tour together.  Don and Royce, we couldn’t do it without you and know that we appreciate you more than words can say.  Thank You.

The tour also announced a new co-sponsor named Pool-300.  Pool-300 is a new pool league concept coming soon to a poolroom in your neighborhood.   You will be hearing more about this in the future.  So keep your eyes and ears open for learning more about this new adventure.

As this was our Championship Stop for this year, it was also time to crown our 2010 OB Cues Ladies Tour Champion.  At the time of the Player’s Meeting, it was too close to call as Lisa Marr was ahead in points but only by 150 to her closest rival, Jennifer Kraber.  Midstream in the tournament as Jennifer suffered a 1st round loss and Lisa won her 3rd match of the day, it was announced that Lisa Marr was the 2010 OBCLT Champion for her 3rd year in a row.  Fantastic Job, Lisa!  You are the best!

The 2010 Most Improved Player was awarded to Michelle Prince from Katy, Texas.  Michelle has demonstrated a winning style and attitude throughout the duration of her past two years playing on the tour.  She improved in the rankings from 27th to 15th and was most deserving of this prestigious award.  Congratulations Michelle!  Your hard work has paid off and it shows!

For the Main Event, thirty-two players were vying for the $750 first place prize monies and it was anybody’s guess who was going to be the winner.  Returning on Sunday still undefeated were Angela Garza vs. Lisa Marr and Terry Petrosino vs. Michelle Cortez.  On the one-loss side, it was Jennifer Kraber vs. Ricki Lee Casper and Amanda Lampert vs. Deanna Kinola.  Ricki and Deanna finished 7th/8th while Amanda and Angela finished 5th/6th.

Michelle Cortez, who was celebrating her birthday on Sunday, had a very solid year of high finishes.  In this event, she was defeated by Jennifer Kraber to take 4th place.  With her previous high finishes, she placed 7th in the final 2010 rankings.  Congratulations Michelle!  We are proud of you!

In the semi-final match, it was once again the top two ranked players, Jennifer Kraber and Lisa Marr.  These two have waged plenty of battles against each other all year long and this time was no different.  Jennifer was again triumphant at this event, sending Lisa home with a 3rd place finish.  Congratulations Lisa on being the 2010 OBCLT Regional Tour Champion, for three times in a row.  You are indeed a champion and always pleasant to watch!

Jennifer, after losing her 1st match against OBCLT Board Member, Julie Stephenson 7-6, came back and won 8 matches to earn her spot in the finals match against Terry.  Jennifer had the best year ever since playing on the tour.  She finished overall in 2nd place in the rankings and finished 2nd place at this weekend’s event.   Congratulations Jennifer, you are a joy to watch, always a good sport and a verifiable champion through and through!

Terry Petrosino played in 3 of the 9 OB Cues Ladies Tour stops this year.  Ironically, the last time she played was in March and it was at Casper’s where she placed 9th-12th.  This time, it was different.  She defeated a number of strong shooters, starting out with Tara Williams, Julie Stephenson, Lisa Henderson-Major, Michelle Cortez, Lisa Marr and then Jennifer Kraber in the finals 7-5.  She played very strong and strategic.  Terry always has been a strong contender since playing on the tour but this time there was no looking back.  She was cool and stroking like a champ.  She stayed on target and focused to achieve her 1st OB Cues Ladies Tour win ever and capturing the 1st place prize money of $750.  Congratulations Terry and we know you will be in the winner’s circle at future OBCLT events!