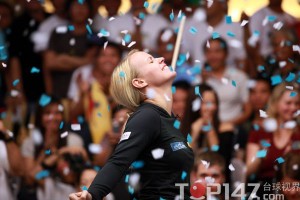 Ouschan has accomplished one of her lifelong dreams

Manila, Philippines- Trailing 4-0 to Korea’s monster Ga Young Kim, Jasmin Ouschan could feel the World Championship slipping away. But the determined young Austrian, backed by a vocal crowd of Jasmin fans, turned the tide and fought back to win the match and her first ever World Championship win. This was the conclusion of the 5 day Yalin Women’s World 10-Ball Championship that drew 48 of the world’s best women in billiards.

The Dragon Promotions produced event took place starting October 23 starting with the Stage 1 Qualifier at Star Billiards Center in Manila, the players meeting and press conference October 24, and then the main event October 25-29th,2010 taking place at Robinson’s Galleria connected to the Crowne Plaza, host hotel of the event. Nuvo City Lifestyle Center hosted the non-televised matches at their nearby event hall in Quezon City. 48 of the world’s greatest women’s players will attend the event to become the World Champion of 10-Ball. This year’s event is title sponsored by Yalin Tables, the premier billiard table manufacturer in China. The Yalin Women’s World 10-Ball Championship was sponsored by BCN Balls, Leqi Cloth, Crown Plaza Galleria Ortigas, Magic 89.9, Philippines Star, Nuvo City, and Robinson’s Galleria. The event will be airing on ABS-CBN and internationally on ESPN Star Sports. The event will be broadcasted live for all five days of the main event with 25 hours of broadcast television coverage.

In the first semi-finals, home country favorite Rubilen Amit was looking like she might be destined to defend her crown successfully at the World 10-Ball. But Korea’s powerhouse Ga Young Kim came out too strong and led 4-0 before Amit even had a chance to play. Amit finally scored a game to the delight of the crowd at 4-1, but then missed an easy 8-ball that further pushed Kim to her goal. Amit made one last surge when down 6-1 to come back to 6-5, but then Kim turned up the notch and finished the match at 9-6 to enter her 4th World Championship finals.

In the second semi-finals, England’s Kelly Fisher and Austria’s Ouschan were both on the hunt for their first World Championship win. But Ouschan was the one who came out strong first while Fisher looked completely lost in her game. Capitalizing on every mistake Fisher would make, Ouschan built a seemingly insurmountable 7-2 lead with only 2 games away from her first ever finals of a World Championship. But Fisher scraped her way one game at a time, and soon Ouschan was the one leaving opportunities as Fisher won the next 5 straight games. At 7-7, Fisher made a bad error in a strategic push, and gave Ouschan the out to lead 8-7. In the next game, it was Ouschan who faltered and gave Fisher control again. Fisher would tie the match at 8-8 and for a final game, but she made the 9-ball and scratched making the cueball as well giving Ouschan an easy 10-ball for the win. Ouschan looked up to the sky seemingly as if to say what did I do to deserve this gift, and then moved on to the finals.

“You kind of hate to win that way when your opponent hands you the win, but what can you do”, said Michael Neumann, Ouschan’s lifelong coach since she was a child.

In the final match, Ouschan only had moments to recover from her traumatic win before facing her biggest challenge of the event in Ga Young Kim. Kim had previously won two World Championships in 9-Ball, but was looking for her first in 10-Ball, which is widely regarded as a much more skillful game than 9-Ball. Kim had also just recently beat Ouschan just one week earlier in the USA in the finals of an ESPN championship event. 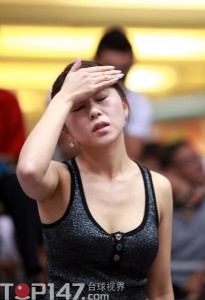 Kim looked like she would run away with the match as she quickly built a 4-0 lead. Ouschan then stopped the bleeding and ran out off a bad safety by Kim and then broke and ran two racks in a row. Kim then started a series of missed shots and mistakes and gave new life to Ouschan and Jasmin ended up winning a total of 7 straight games to turn the tide over her Korea nemesis. At 7-4, Kim finally made some great shots including a long cut on the 10-ball to close to 7-5. But a mistake in the next rack again pushed Jasmin back to 8-5. At 9-6, Kim made her final error with a botched safety attempt on the 3ball , and Ouschan started her final run for the win. As she came to the final 10-ball, tears in her eyes and a wave of emotion could be visibly seen on her face. As the final 10-ball was pocketed, Ouschan let out a yell and a mountain of emotions poured out of her slim frame. 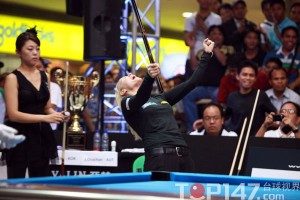 “I can’t believe I won this event, especially in front of my favorite fans in the billiard capital of the world. I just want to thank Michael for coaching me and Dragon Promotions for orgazining this great event. It’s going to take me a few hours still for this to all sink in and hit me”, said Ouschan tearful in her championship speech.

“She’s won this event so early in her career, she’s only 24 years old. I’m just worried to keep giving her goals to achieve”, said Neumann.

Ouschan previously had swept all four of the European Championships for women, won several tour stops in the USA, and a World Games gold medal. But this win by far exceeds all other of her accomplishments. Jasmin will be able to enjoy being called The World Champion for the next several months. 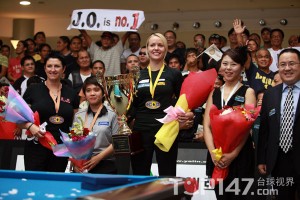 Www.Top147.com has all the results and live daily coverage in China.
Stories, complete info and updates will be on www.WomensWorld10Ball.com and Brackets will be hosted by www.AZbilliards.com

With these global network and media partners the Yalin Women’s World 10-Ball Championship will be the biggest and most watched women’s billiard event in history.

Yalin Billiard Goods Co., Ltd., established in 1993, located in Jinan the Northern part of China, is specialized in the production of high quality billiard tables and accessories. In its 100,000 square meters facility, Jinan Yalin Billiards is one of the world’s largest manufacturers of billiard tables and products in its. Yalin manufactures many kinds of billiard tables and its accessories including Snooker tables, American style pool tables and Russian pyramid style. Also other sporting games such as family billiard/tennis table; international standard tennis table for entertainment, and any customer designed tables. Yalin has received the highest marks internationally than any other Asian manufacturer and was selected by Brunswick Billiards as their sole exclusive partner in China. Yalin has exported high quality tables to over 70 countries including the United States, France, Canada, Russia, Japan, Singapore, Arabia, and more. Visit http://www.yalin.cn/