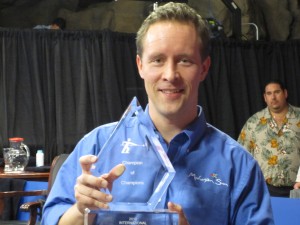 “This is the toughest tournament in the world,” said an elated Mika Immonen moments after capturing the 2010 International Challenge of Champions title. The pressure packed $25,000 winner-take-all event was held at Mohegan Sun in Uncasville, Connecticut, October 5. Immonen, from Finland, defeated Francisco Bustamante of the Philippines in the final match, and was crowned the new “Champion of Champions.” The two semifinals and the Championship match were taped by ESPN for telecast beginning December 12.
“You have to be on your game the entire tournament,” said Immonen. “There’s no margin for error when every player is a champion. One shot missed and you can lose $25,000! The pressure is just incredible.”
Indeed, of the four international champions in the event, Immonen had to fight his way to the title. The Semifinal and Final matches require the winner to win two sets, race to 5 games each set. In the event of a tie, the pressure becomes intense with a one game sudden death shootout.
Immonen, voted Player of the Decade, played 2010 European 9-Ball Champion Ralf Souquet in a semifinal match, which he won 5-3 and 5-4. In the other semifinal match, 2010 World 9-Ball Champion Bustamante defeated Karl Boyes of England, the 2010 World 8-Ball Champion. After battling back and forth, Bustamante took the first set 5-0 and Boyes found his stride to take the second set 5-2. In the one game sudden death, Bustamante won the lag, then broke and ran out to win the match. 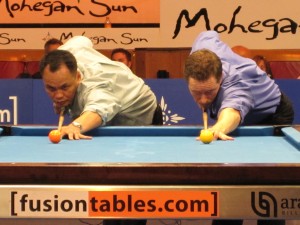 Immonen’s final match against Bustamante was a nail biter, featuring flawless run outs and exquisite safety play. Imomonen narrowly won the first set 5- 3 and Bustamante then rallied to take the second set 5-2. The players then went to a one game sudden death, and after a tense safety duel, Immonen closed out the Championship match for the title. In the twenty year history of the event, Immonen became the first player to win the tournament two years in a row, 2009 and 2010.
The crowd gave Mika Immonen a standing ovation when he won the final match. He raised his arms in victory and then accepted the highest single purse in international winner-take-all tournaments. The trophy and the check were presented by Mohegan Sun and Fusion Billiard Tables. The presentation brought another round of cheers from the audience.
The 2010 event was the twentieth annual International Challenge of Champions and the fourteenth to be held at Mohegan Sun. Tom Cantone, Vice President of Sports & Entertainment for Mohegan Sun, was delighted with the support displayed by the crowd of pool fans. “We will continue to host this event,” he said. “The crowds were even more than we anticipated, and the players were amazing. We are extremely pleased.”
In addition to the fine tournament site at Mohegan Sun, the event was sponsored by Fusion Billiard Tables, Aramith Tournament Billiard Balls, Simonis Cloth, Mueller Recreational Products, Executive Billiards Delta-13 Rack and Silver Cup Chalk. The WPA sanctioned event was produced by Matt Braun and Bettiane Braun of Billiards International, Ltd.