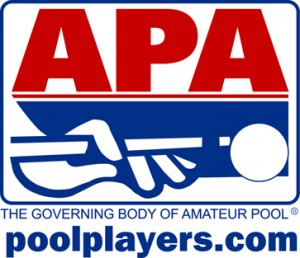 LAKE SAINT LOUIS, MO (September 3, 2010) – The American Poolplayers Association’s (APA) 30th Annual National Team Championships saw a record number of teams compete in the newly expanded 10-day extravaganza. Nearly 2,000 8-Ball, 9-Ball, Doubles and Masters teams made the trek to Sin City to compete, Aug. 19 – 28, for more than $1 Million in prize money. Due to record participation, the event had to be extended an extra day. 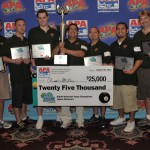 In the 8-Ball Open Division, Chumba’s All Stars of Topeka, Kan., defeated the Bad Elements of Black Mountain, N.C., 3-1 in the finals to take home $25,000 in cash and the championship title.

As Runners-Up, the Bad Elements received $15,000 in prize money.

Finishing in 3rd Place were Deep Pockets of Osawatomie, Kan., and That’s How We Roll of Baton Rouge, La. Each received $7,500 in prize money.

In a four-way tie for 5th Place were The Legends of Kirksville, Mo., the Dream Busters of Fairfield, Ohio, the Ice Breakers of East Peoria, Ill., and Mack’s 8-Ballers of Louisville, Ken.; each team received $5,500 for finishing tied for 5th Place.

In a tie for 5th Place were the Hustlers of Gretna, La., I’m Just Saying of South Park, Pa., Chicks with Sticks of Jackson, Miss., and Pink 8’s of Lafayette, La. Each 5th Place team received $1,000 in prize money.

All teams in the 8-Ball Championships squared-off in a modified single-elimination format that ensured each team played at least twice before elimination. All 8-Ball Open Division teams automatically received $350 in national qualifier money, and the top 8 teams won at least $5,000. In the 8-Ball Ladies Division, all teams automatically earned $350 national qualifier money, with the top 8 teams winning at least $1,000. The Open Division began play on Aug. 22 and concluded on Aug. 28. The Ladies Division of the tournament started on Aug. 19 and concluded on Aug. 22. 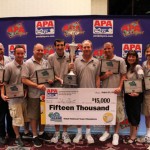 Two teams tied for 3rd Place in the Open 9-Ball division. 9-On-The-Run of Woonsocket, R.I., and the Land Sharks of Garner, N.C. Each team took home $3,500 in prize money.

Finishing in 5th Place were the Bad Attitudes of Memphis, Tenn., and the Good Fellas of Mississauga, Ontario. Each 5th Place team received $2,000 in prize money.

The Open 9-Ball National Championship was held Aug. 19-23, with each team competing in a modified single-elimination format that ensured each team played at least twice before elimination. All national qualifiers received a minimum of $350, with the top 6 teams winning at least $2,000. 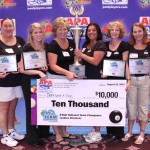 After winning their divisions in weekly APA 8-Ball and 9-Ball League play and then placing in Local Team Championships throughout the United States and Canada, 723 Open 8-Ball, 399 Open 9-Ball, and 57 Ladies 8-Ball teams, all consisting of five to eight players, qualified to compete in the 2010 National Team Championships.

In the Open 8-Ball Doubles Championship, it was Carolina Express of Dunn, N.C., winning $6,500 in the finals with a victory over Melissa & Joseph of Madison, Tenn. Melissa & Joseph received $4,000 as Runner-Up in the 384-team event. 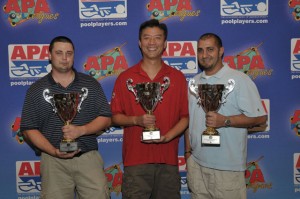 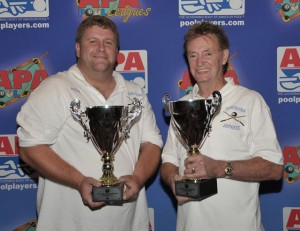 In the Open 9-Ball Doubles Championship, Kool Katz of Stoneham, Mass., defeated Yeaa Buddy of Lake Worth, Fla. Kool Katz took home a 1st Place prize of $5,000 and the championship trophy, while Yeaa Buddy walked away with $3,000 in prize money. 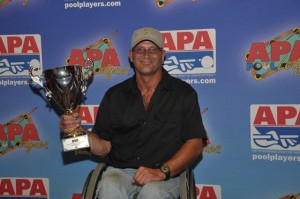 Dale Fitch of Federal Way, Wash., defeated Andrew Niebrugge of Decatur, Ill., for $2,400 in the finals of the APA Wheelchair Challenge. Niebrugge took home $1,000 as Runner-up.

The APA, based in Lake Saint Louis, Mo., sanctions the world’s largest amateur pool league, known as the APA Pool League throughout the United States, and as the Canadian Pool League in Canada. Nearly 270,000 members compete in weekly 8-Ball and 9″‘Ball League play. The APA is generally recognized as the Governing Body of Amateur Pool, having established the official rules, championships, formats and handicap systems for the sport of amateur billiards.

For more information on the National Team Championships, visit the official APA Web website at www.poolplayers.com.