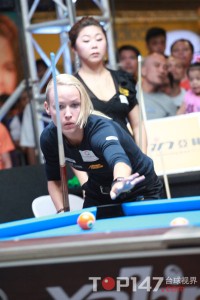 Manila, Philippines-  Austria’s Jasmin Ouschan captured the #2 seed after the round robin stage of the Yalin Women’s World 10-Ball Championship. She is the only non-Asian to win the bye, skipping the first round of the final 24 player cut. Only three western ladies remain: Ouschan, Kelly Fisher of England, and Louise Furberg of Sweden.

Ouschan went undefeated in the round robin stages with 5 wins, no losses, and only dropped 10 games total. She was only surpassed by China’s Xiaofang Fu who had dropped only 7 games. Jasmin defeated her arch nemesis Korea’s Champion Ga Young Kim as well as top players from Japan and India. Ouschan will face Chen of China or Lin of Taiwan tomorrow. Jasmin is going for her second World Championship win at this event. She was gold in 2010.

Fisher took the #9 seed and makes it to the final cut for the fourth year in a row and is still a huge contender to defend her title here as reigning World Champion. She faces T.C. Wei of Taiwan tomorrow and if she wins, she will play her sweet sixteen 16 match against China’s 19 year old Sha Sha Liu, a former World 9-Ball Champ.

The #14 seed is little known Furberg from Sweden, a long time veteran from Europe. She is a 7x Gold Medalist European Champion. Though it’s her debut appearance here in the Philippines at the World Championship, she is a seasoned veteran and should hold up well under the pressure.

“It only takes one bullet to win the World Championship. And there are still three diamond covered bullets left in the event”, commented Charlie Williams, the creator of the Women’s World 10-Ball Championship.

The Dragon Promotions produced 4th Annual Yalin Women’s World 10-Ball Championship is the most followed women’s event of the year. In the host country of the Philippines, it is the biggest female sporting event of the country. The event is supported by Asian table mammoth Yalin Billiards, advanced cue engineer OB Cues, long lasting Championship Tour Edition Cloth, top playing Aramith Balls, Tour Edition Chalk,  and #1 TV network broadcaster ABS-CBN. Star Billiards and Pool & Billiard Magazine are also proud supporters. This year’s edition will take place August 20th-24th once again at Robinson’s Galleria Mall, which has now become synonymous for creating the dynamic atmosphere of the coveted championship. Robinson’s Galleria is connected to the host hotel Crowne Plaza Galleria. With massive media and global networks covering the Yalin Women’s World 10-Ball Championship, it will continue as still the biggest and most watched women’s billiard event in the world.

An elite 48 world class pros and international women superstars are fighting it out in Manila. With the one goal in mind: to become the World Champion of 10-Ball.