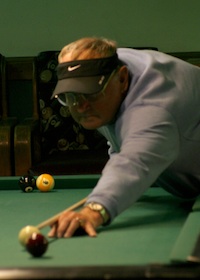 Laddy Mills
Mills holds off one-loss side challenge from Petrov to win New England 9-Ball season opener
Laddy Mills stopped a 7-match, one-loss side winning streak by Ivo Petrov to go undefeated and pick up the victory on the opening stop of the New England 9-Ball Series on Sunday, September 12.  The $100-added event drew 26 entrants to Buster’s Billiards in Somersworth, NH.

Working among the winners’ side final four, Mills defeated Garith Steele 4-1 to get into the hot seat match. He was joined by John Korapusick, who’d sent John Dennis west 6-1. Mills got into the hot seat with a 5-3 win over Korapusick and then watched Petrov claw his way back to the finals.

After an opening round, 4-3 defeat at the hands of Brandon Cole, Petrov won four in a row, including a shutout victory over Roger Morrison and a 6-3 win over Dan Simoneau, to reach Steele. Dennis drew Corey Tapaly, who’d defeated Stan Rupard 6-3 and Lee Laducer 5-4.  It was Dennis and Petrov advancing to the quarterfinals; Dennis with a 5-4 win over Tapaly and Petrov with a 5-1 victory over Steele.

Petrov dominated the quarterfinal match, defeating Dennis 8-1 and moving into the semifinals versus Korapusick. Petrov completed his seven-match winning streak with a 6-2 win over Korapusick and turned to face Mills in the finals. A 4-2 win by Mills ended Petrov’s run, and concluded an undefeated weekend for Mills.