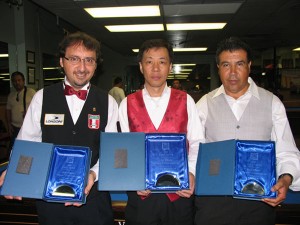 Some of the best players did not make the semi-finals. Among them were Javier Teran from Ecuador, Jae Hyung Cho from Colorado who is the current United States Champion, Guillermo Sosa and Alain Hernandez from Mexico, Vicky Pineda and Salvador Diaz from Los Angeles and Michael Kang from New York. That’s how strong the field was.

Forty-one players participated in all. There were 4 groups with 8 players each and a fifth group that had 9 players. That’s all there was time for. Each night ended late, especially Saturday night which didn’t finish up until 2:00am. The top 2 finishers of each group (Groups A through E) in the Preliminary Rounds would advance to the semi-finals. Along with those 10 players advancing, there was one lottery and one auction spot. A local patron won the lottery and he proceeded to allow Guillermo Sosa into the finals. The auction was won by Jae Hyung Cho, who paid $1,100.00 for a spot in the finals. That turned out to be a great investment for him. All monies from the lottery and auction were put into the players prize fund. The preliminary rounds were 25 point matches and the semi-final rounds were 30 point matches.