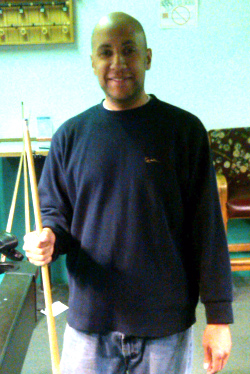 Rich Senna came back from a victory by Nick Kafalas in the opening set of a true double elimination final to win the second set and take home the first place prize in the New England 9-Ball Series stop on March 28. The $100-added, BCD handicapped event drew 44 players to Buster’s Billiards in Somersworth, NH.

Senna had to play Kafalas three times to seal the victory. He faced him first in the hot seat match after he’d sent Dennis Levesque west 5-4, and Kafalas had shut out Josh Rupard 5-0. In the hot seat match that followed, Senna prevailed 5-3 and awaited Kafalas’ return from the semifinals.

On the one-loss side, Terry McDermott and Jason Cheng were waiting for Rupard and Levesque, respectively. McDermott had defeated Steve Stahl 4-1 and Jeff Pike 4-4 to draw Rupard, as Cheng was busy defeating Rob James 5-3 and Brandon Cole 5-4 to face Levesque. It was Rupard and Levesque who advanced to the quarterfinals after Rupard had dropped McDermott into the tie for fifth place 6-3, and Levesque did likewise to Cheng 6-2.

Levesque got into the semifinals against Kafalas with a decisive 5-1 win over Rupard, but settled for  third place, when Kafalas won the semifinals 5-3 for his second chance at Senna.  Kafalas took the opening set of the true double elimination final 5-4, handing Senna what proved to be his only defeat on the day. Senna came back to win the second set 5-4 to capture the first place prize.

I would like to thank all my sponsors, hope to see everyone at the next event will be April 18th at Legends Billiards in Portsmouth NH, it will be an All Class event and it will be