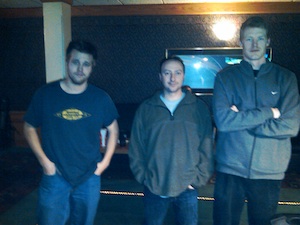 Dennis Leveque got by Dereck McArthy twice – once easily and once, not so easily – to go undefeated at the New England 9-Ball Series tournament on Sunday, February 21. The $150-added handicapped, 10-Ball event drew 25 entrants to the Westgate Lanes in Brockton, MA.

The two met first in the hot seat match, after Leveque had sent Ellis Lawrence west 5-2 and Mcarthy had dispatched Nick Conner 4-2. Leveque shut Mcarthy out at 5-0 to gain the hot seat and await his return.

On the one-loss side, John Skillings and Steven Stahl advanced to meet Lawrence and Conner. Skiilings had survived two hill-hill matches versus Peter Kramer and Paul Linteris to draw Lawrence. Stahl  defeated Jim Prather 3-5 (hill-hill) and Dave Hambley 4-2 to pick up Conner. Lawrence shut Skillings out to move into the quarterfinals. Stahl battled to double hill against Conner before joining him.

Stahl, now having won two out of his last three matches the double-hill hard way thought he’d give it another go, and dropped Lawrence into fourth place with his second straight hill-hill win. Stahl’s bid ended right there, though, as an apparently determined Mcarthy shut him out in the semifinals for a second chance at Leveque.

Both having entered the finals by means of a shutout victory, Leveque and Mcarthy entered those double elimination finals with hopes of duplicating that effort. It was not to be. The two battled back and forth to double hill before Leveque prevailed, concluding an undefeated day that earned him top honors.