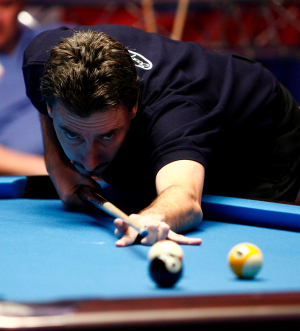 JOHNNY ARCHER, the 40 year-old veteran of 12 Mosconi Cups, gets his chance to help overturn a four year winless spell for America as he becomes the first player named for Team USA ahead of December’s PartyPoker.net Mosconi Cup at the MGM Grand in Las Vegas.

The Georgia-based Archer’s inclusion was announced by Matchroom Sport Chairman Barry Hearn via a DVD played out at the Marriott Hotel, Chesapeake, Virginia where Archer was inducted into the BCA Hall of Fame on Thursday night (22nd October).

With eight Mosconi victories under his belt and a 29 wins from 58 match record, Archer will need every ounce of his experience if his side are to derail a rampaging European side that has already named Ralf Souquet, Niels Feijen and Darren Appleton.

Commented Matchroom Sport’s Barry Hearn, “Johnny may or may not make the top two of the rankings, but he is a natural pick if the USA are about to get back to winning ways at the Mosconi Cup.

“In among the young guns you need a steadying hand with bags of experience and Johnny is just that. He also knows how to win this event and if he can help galvanise his team, then I believe that for all the European talent, the Americans have got a very realistic chance of winning the Mosconi Cup outright for the first time since 2005″

The 2009 PartyPoker.net Mosconi Cup takes place from Thursday to Sunday 10-13 December at the MGM Grand Hotel in Las Vegas.

Live in its entirety on Sky Sports in the UK, the event features two five-man teams representing Europe and the USA doing battle in a series of singles and doubles matches. Now in its 16th year, the Americans hold a 10-4 lead with one tied match in 2006.

With the US Open set to conclude this Saturday 24th October, the next three American players will be named early next week. They will be the #1 & 2 players atop the BCA Points List as well as one wild card pick. The remaining spot will go to the player who amasses the most votes in a public poll set to take place on the pages of www.matchroompool.com

Tickets for the Mosconi Cup are available from: