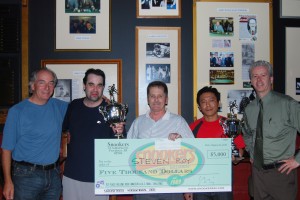 Steve Roy wins Rolling Rock Challenge
After seven weeks of qualifiers Snookers Sports Billiards Bar & Grill of Providence RI held the finals of the $5000.00 Rolling Rock Challenge on August 28th and 29th. The only way to play in the finals was to finish in one of the top three positions in a qualifier. Players were divided into 3 classes “A”, “B”, and “C”. Players ranked in the “A” class raced to 8, “B” to 7 and “C” to 6. There were separate qualifiers for each class so you only had to compete against equal skill levels to qualify. Once 64 players qualified (21 for each division and one random draw from non winning entrants) they held the finals doing a random draw for all 64. Each player in the finals raced to the level as used in the qualifiers (6,7 or 8).

Day one featured some early exits for some top rated players. Joey Dupuis got bumped out by Joe “Lucky Joe” Marrero and Steve Goulding (Snookers Owner) got bumped by George Berube. By the end of Day one the field was cut down to 16 which included nine A’s, six B’s and one C (Marcos Cesco).

With $5000.00 guaranteed for first place the players on day two were eager to get started and nerves were a little on edge. Ten of the first twelve matches went hill hill which only heightened the tension. Players were more critical of the racks, play had slowed and time outs were more frequent. The two players that settled the nerves the best were Mhet Vergara (A Player NY) and Stevie Roy (B player MA). Stevie Roy defeated Pete Bowman, Eric Charlton, Clyde Matta, Choneyi Tenzin, Ivaylo Petrov and Mhet Vergara. Mhet Vergara defeated Hank Anthony, Chuck Sampson, Rich Senna, Brent Boemmels, Billy Lanna on the A side and Billy again on the B side to meet up with Stevie Roy in the finals.

The finals were set with Stevie racing to seven and Mhet racing to eight. The two players agreed that Stevie would put his one game edge on the wire and make it a race to eight for both. It didn’t take long for Stevie to add to that one game advantage, he jumped out in front 6-2. In game number eight Mhet was slightly hooked on the three ball and came with a great carom shot to pocket the four and run out (score 6-3). The next two game would also go in Mhet’s favor making the score 6-5. In game eleven Mhet just over cuts a three ball that hangs in the pocket opening the door for Stevie. Stevie who claims he doesn’t to take the heat well confidently ran out for a 7-5 lead. Stevie being on the hill for $5000.00 tries to add a little extra on the break, guess why, and scratches. The next two games are awarded to Mhet for another hill hill match. In the final game Stevie was faced with a rail to rail two ball and elected to play safe. Not hitting it just the way he wanted he left an open shot for Mhet. Mhet calmly started his run making it down to the eight. After weighing his options for position on the nine he attempts to go around it. Unfortunately he ran straight into it leaving a cross side. Attempting the bank he goes a little long and sets Stevie up for what will be remembered as the shot of his life. Cue ball about a half an inch off the top rail and the nine two diamonds away from the bottom rail at a slight angle. Stevie with the nerves on edge and heart pounding gets up on the shot, resets and fires it in.