Pedro Piedrabuena is the Panamerican Champion!

The USBA sent 4 players to the CPB Championships in Buenos Aires, Argentina. The CPB (Confederacion Panamericana de Billar) is the governing body for 3-Cushion Billiards in both North and South America. The tournament took place August 5-8, 2009.

Pedro Piedrabuena won the event and is the new Panamerican (CPB) Champion. Hugo Patino finished in 6th. Miguel Torres finished in the top 16 and Michael Kang finished in the top 32. Pedro and Hugo, along with six other top CPB finishers will represent the CPB and their countries in the World 3-Cushion Championships which will be held in Lausanne, Switzerland, November 11-15, 2009. More details on the results at the CPB championship will be posted on the CPB website (http://www.cpbillar.net) as they become available. 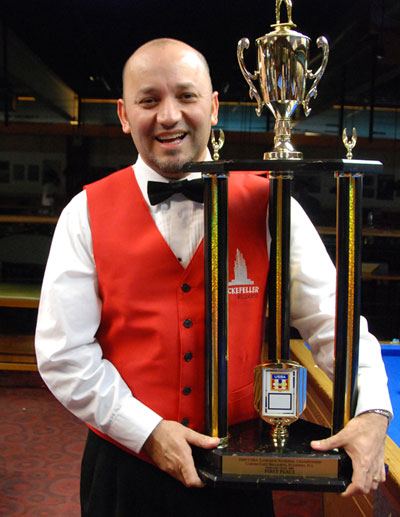 This is a nice thing for our players because they will all be receiving various amounts of World Ranking Points for their performances which can give them some advantages and benefits in other world tournaments in the near future.

Pedro Piedrabuena is now ranked # 23 in the World, Hugo Patino # 42, Miguel Torres # 47 & Michael Kang # 117. You can see more results & rankings (maybe even your own world ranking) on the UMB’s website. The UMB (Union Mondiale de Billard) is the World Governing Body for all carom games: http://www.umb.org

The CPB President, Jorge Araneda, posted a blog on the event in Spanish if anyone is interested at: http://billar-cpb.spaces.live.com/blog/cns!1DCD483CA0E0EC5B!649.entry

Congratulations to Pedro, Hugo, Miguel and Michael for their fine performances and for representing the United States!