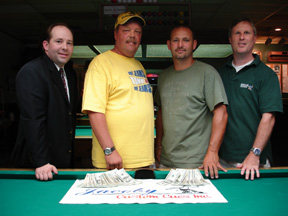 In the final match, a single race to nine, Champion won the lag and made three balls on the break.  He was snookered, however, after his first shot and his next three shots were kicks.  Champion was given one more opportunity, but was unable to get out.

It was nip and tuck throughout the match, in which defensive strategy was prevalent and runs of more that four balls were rare.  Abernathy converted a 5/6/7 combo and got out to tie the score at 4 games apiece.  A break-and-run was followed by a scratch on the break.  With ball-in-hand, Champion ran out to tie it again at 5-5.  Champion won two out of the next three games to lead 7-6, but came up dry on the break and Abernathy ran out.  A 3/9 combo put Abernathy on the hill and a 5/9 combo gave him the match.  Final score:  9-7.

Congratulations to cue raffle winner Tyler Currin, who was the lucky winner of a Limited Edition cue, valued at $850, from Jacoby Custom Cues.

Rock City Promotions wishes to extend special thanks to the staff and ownership of Break Time Billiards and to OB-1 Cues for supporting the Jacoby Tour.

The next stop on the Jacoby Custom Cues Carolina Tour will be August 1-2 at Fast Eddie’s in Goldsboro, NC.  The event will guarantee $1000 added with $1000 for 1st place.