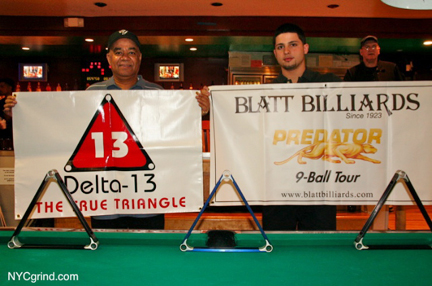 On May 30-31, the Predator 9-ball Tour took over Master Billiards in Queens, NY, for tour stop #7, their third ABCD event of the season. This event attracted 60 of the best amateurs from around the New York area, such as John Alicea, Michael Yednak, Dan Cintron, Jose Cruz, and Jay Chiu.

Four of the toughest female players from around the area also came out to compete… Gail Glazebrook, Borana Andoni, Linda Cheung, and the highest finishing female, Diana “Snookie” Rojas, who was awarded $60.

In this format, the C/D players played against each other on the bottom half of the bracket, while the A/B players took the top, in a handicapped race to 7, lower ranked player spotted games on the wire.

The Winner’s Bracket:
After defeating Shorty Santiago, William Finnegan, and John Chong, Ed Hugh faced off against young gun John Alicea, in a match that Alicea dominated by a score of 7-4.

Rising to the top of the winner’s bracket on the C/D side, Jay Chiu would defeat Ron Mason by a score of 7-4 to move on to the match for the hot seat against Alicea.

In the match for the hot-seat, underdog up-and-comer Jay Chiu, who had an impressive performance in this event, faced of against John Alicea, spotting Jay 2 games on the wire in a race to 7.

This match impressively went hill-hill, with the players trading game for game, and Jay showing some strong banking skills. However, in the final game, John’s firepower kept him on top to win a spot in the finals.

The One-Loss Side:
There were still plenty of tough players fighting it out on the one-loss side come Sunday morning when the action started at noon.

Michael Yednak, who was knocked to the one-loss side by John Alicea, would have a great run to defeat Jerry Tarantola, William Finnegan, Dan Cintron, John Chong, and Ed Hugh, to fall to Jose Cruz in a close 7-5 match.

Jose Cruz also came a long way through the loser’s bracket, winning a stunning 10 matches to land in the finals against John Alicea, after crushing Jay Chiu by a score of 7-1. Jose’s play was very impressive, and I would say he was playing near-perfectly on Sunday afternoon.

The Finals:
In the final match, Jose Cruz would meet with the undefeated John Alicea in a final race to 9. Cruz, rated as a “C,” got 2 games on the wire in this match, as Alicea is rated an “A.”

However, as mentioned, Jose was showing some outstanding play on that afternoon, and with the two-game spot, this match turned out to be an uphill battle for Alicea. Early on, Alicea made some uncharacteristic mistakes, and Cruz jumped to a 4-2 lead after John scratched on the break. In the following game, Jose would break dry to allow John to runout and close the gap to 4-3.

Just as things were looking to turn around for Alicea, Cruz jumped up to a huge 8-3 lead over Alicea after a couple crucial missed balls, landing him one game away from the win.

But, in the following game, Cruz missed a safety, letting John run out, making the score 8-4, and Alicea started to pick up some momentum. Cruz also started to make some little mistakes that weren’t customary in the beginning of the set, as he hung an 8-ball, allowing Alicea another game 8-5.

John was finally getting into his stroke, and turned his game around making some smarter defensive decisions. To close the gap to two games, John broke successfully and left a 2-9 combo to make the score 8-6.

After John missed a 1-ball in the next rack, the players exchanged safeties with John coming out on top. From there, John ran to 8-ball, but made a misstep on his position for the 9, tapping it into the rail and leaving the cue ball facing the 9 to the rail. John and Jose exchanged safeties, nudging the cue into the 9, but John played the game winning safe by skimming the cue off the 9, keeping the 9 on the rail and the cue on the opposite rail. Jose would attempt a bank on the 9, but miss and leave it for John, making the score hill-hill.

In the hill game, Jose broke, then missed a 1-7 combo. John ran to the 4, but got out of line on the 5 and played safe. However, Jose got another chance, but landed bad on the 9, with the 9 near the end rail and the cue facing at an 80 degree angle. Jose went for a full-table bank, and it barely rattled, leaving the match and the win for John.

Both players showed a lot of heart throughout the event and fought hard to make it to the finals. Congratulations to John Alicea for his first Predator 9-ball Tour win! 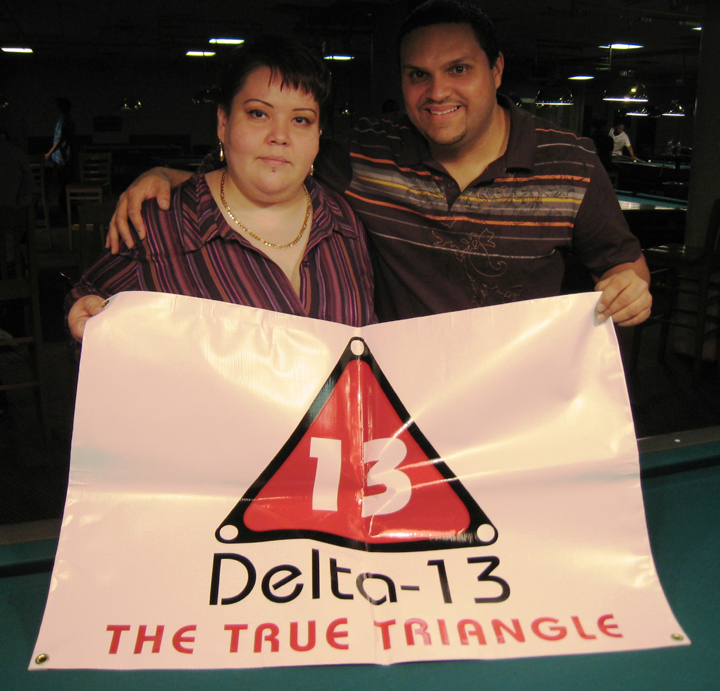 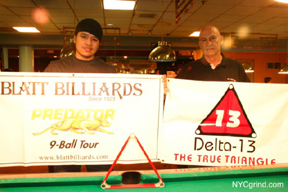