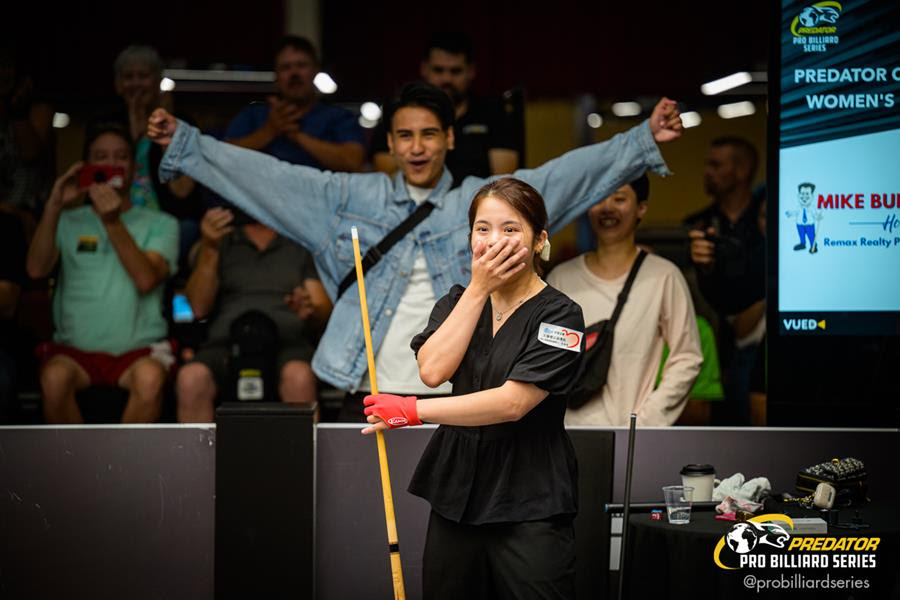 Chia Hua Chen defeated Allison Fisher in a shootout for the second time this week to mark her return to international competition by winning the Predator Canada Open.

Fisher had to come through the one loss side to reach single elimination after her first match of the tournament had ended in defeat to Chen, who didn’t lose during the event.

‘Amber’ Chen had won the first set of the final 4-2, but a 4-0 second set in Fisher’s favor forced the match to shootout. Fisher missed her first of four attempts but when Chen missed her last, Fisher had a chance to take it to sudden death. However, the Duchess of Doom was unable to prolong the match any further and when she missed at 3-2 down, the title was Chen’s.

“I cannot believe it,” said Chen through her partner, Robbie Capito. “This is my first international tournament after the pandemic, so I didn’t expect much coming into the tournament, so I am very happy with the win.”

Fisher took a 2-0 lead in the final but a poorly executed safety attempt on the 6 allowed Chen to fight back to 2-2. The Taiwanese star earned ball in hand when a great safety on the 7 left Fisher unable to make a connection in the fifth game. She scratched the cue ball breaking in the sixth but a brilliant bank, the length of the table, gave her a 4-2 set win.

Fisher responded with the first game of the second set and made a 7/10 combo for 2-0. The Duchess of Doom was first to take a chance after a safety battle in the third and after a thin cut to make the 9 left perfect position for the 10, Fisher was one game away from a shootout, and she wrapped a 4-0 set with a great runout.

The shootout format allows each player four innings, after which sudden death comes into play if the score is tied after the first four shots each.

Chen was first to shoot and despite having been consigned to her seat for much of the second set, found the center of the pocket. Fisher hit her first effort too thin, and Chen went 2-0 ahead in the shootout with her next shot.

Fisher could barely afford to miss again and produced a great pressure shot straight into the heart of the pocket to make it 2-1. Chen kept control with her third successful shot, meaning Fisher had to make her next; she did.

Chen had her fourth shot for the title but clipped the jaw to keep Fisher alive. The Brit had one shot to force sudden death, but she too missed. Chen had to check with referee John Leyman to confirm; Fisher’s miss meant that Chen was the Predator Canada Open champion, taking home $18,000.

In her semi-final, Chen had been forced to a shootout by the battling Australian, Bean Hung. Chen had won the first set 4-0 but her opponent didn’t give up and took the second set from hill-hill. However, the Australian struggled in the shootout, which Chen won 3-0.

Fisher had taken the longest route possible to the final, having lost her opening match – a shootout defeat to Chen. She bounced back through the one loss side with wins against Stephanie Mitchell and Maryann McConnell to reach the last 16, where close friend and three-time Pro Billiard Series winner Kelly Fisher was waiting.

Allison put in a strong performance to win by shootout, and then defeated Kyoko Sone in the last eight. Bulgaria’s Kristina Zlateva was Fisher’s semi-final opponent and the experienced Brit completed a 4-0, 4-2 win without wasting much time.

Full match replays from the feature table can be watched on the World Billiard TV YouTube channel.