Surprisingly, all these rascals were invited by Club Host Bob Keller to compete in the Top Shelf INVITATIONAL 3-Cushion competition. The 8-Player 30-Point Round-Robin Top Shelf event was created to fill the void left by the third cancelation of the 32-Player event due to Covid -19 related concerns. The 32-Player event was originally scheduled for April, rescheduled to July and then rescheduled again to September 24th.

Although the quality of the competition was outstanding, even more amazing is the fact that the Top Shelf event was 100% FUNDED BY BILLIARD PLAYERS consisting of the Player Entry Fees and SIGNIFICANT DONATIONS from other Billiard Players from around the nation. See more results BELOW! 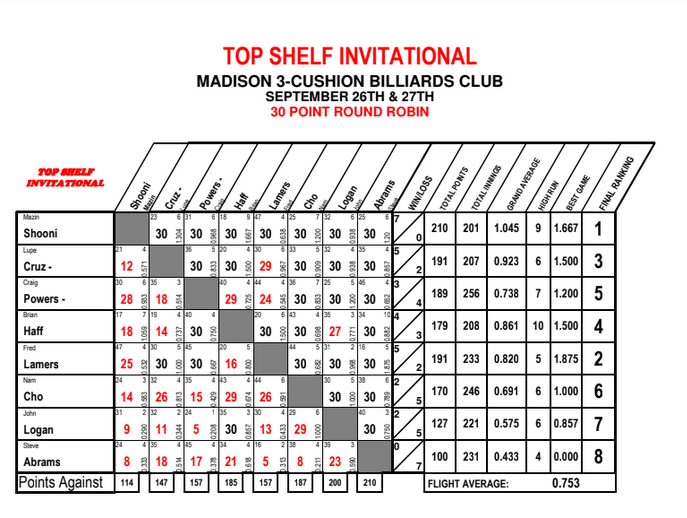 Each of the four tables were originally intended to have their own Live Stream and the event was promoted as such. Well, somewhere along the line YouTube changed “the rules” and only one table Live Stream was allowed. Of course, this was confusing and frustrating to online spectators but totally out of our control. Therefore, Table One maintained the static live stream for the entire event so all the players would be on camera sometime during the event. Dale Saunders deserves thanks and sympathy for having to deal with this crisis as soon as the competition began.

On a positive note ALL MATCHES were recorded and then posted to YouTube. To view follow these four easy steps: 1) Go to www.madison3-cushionbilliardsclub.com 2) Click “Watch Live Stream or YouTube Videos Here” 3) Select “Videos” from the menu bar. 4) Select the match you want to watch and enjoy.

* 12 matches included a player average of 1.0 or higher

* 7 matches included a player average of .9 or better

* Every player had at least one match average of .6 or higher

* 20 matches included a player average of .6 or better

The Complete Round-Robin Chart is available now at www.professorqball.com and will be posted soon in the Completed Events section at www.madison3-cushionbilliardsclub.com

Here is how they finished:

* Technical Director Dale Saunders for keeping the tournament on schedule and to the best of his ability on-line.

* Bob Keller for his continued generosity to the billiard community and especially for sponsoring the Saturday Night Dinner for the players and technical support folks.