(Doha, Qatar)–Sir Henry Royce, the maker of the famed motorcars, Rolls Royce, once said, “Take the best that exists and make it better. Accept nothing nearly right or good enough.”

Royce’s creed of excellence could very well be applied to the four greats who grabbed their semi-finals spots Wednesday at the Al Arabi Sports Club in Doha on the penultimate day of 2018 World 9-ball Championship. On a day of championship 9-ball pool of surreal quality, Carlo Biado, Shane Van Boening, Joshua Filler and Alexander Kazakis all wouldn’t take no for an answer, all reached for greatness, all excelled beyond the rest.

The four superstars now head into the final day on Thursday with an equal chance of entering pool’s pantheon of greats.  Biado, who won here last year, is already there, and will hope to become the first player since Earl Strickland 27 years ago to win back to back titles. But first the Filipino will have to match wits with the USA’s Shane Van Boening, who seems destined to finally snap off the big one.

In the other semi-final, young German hot shot Filler will look to fulfill a dream many thought he would one day reach, but perhaps not at just 21 years old. But to get there the fast and loose playing Filler will have to battle through Greek workhorse Kazakis, who simply never knows how to quit.  Both race to 11, alternate break semis will be played simultaneously beginning at 11am Doha time(GMT +3). The race to 13 final will break off at 3pm local time.

Despite his soft spoken and humble nature, Biado has to be the favorite of the final four, if only slightly, due to several factors; he knows what it takes to reach the mountain top, he plays under the radar, and he is playing the best pool of his career.  In the round of 16 match that began the day, the 37 year old Biado came up against 2005 World 9-ball Champion Wu Jiaqing. The pair dueled for 90 minutes, breaking and running numerous racks. But when Wu scratched while down 9-8, the champ did what champs do; he closed the door and won a hard fought battle, 11-9.

The Filipino then came up against Taiwan’s rising player, Wu Kun Lin, who had disposed of Finland’s Petri Makkonen earlier.  These two had history and it was to Biado’s favor for Wu was the very player the Filipino handily beat in last year’s semi-final on his way to the title.  The result Wednesday was nearly identical. Firing on all cylinders Biado streaked out to a commanding 6-0 lead and never looked back, winning easily 11-4.

In the round of 16 Van Boening was expected to have a tit for tat showdown with England’s Chris Melling, who was having the best year of his pool career.  But Melling couldn’t get many clear shots off the break, and the American took advantage.  The match was tight early but Van Boening walked away an 11-5 winner.

In the quarters the American matched up against world number two, Taiwan’s Chang Jung Lin. Chang had earlier taken down compatriot Lin Ta Li, 11-7 and was starting to be mentioned as one of the favorites to take the title. Indeed for three quarters of his match against Van Boening, Chang did everything he needed to do to get himself into the semis and take a crack at his first 9-ball world title. Van Boening especially looked to be on the ropes when, at 7-5 down,  he flubbed some shots and soon found himself 8-5 down. But after Chang took a bathroom break, the momentum suddenly shifted. The American found a gear while the Taiwanese went cold. Van Boening won six on the trot to win, 11-8.

The brash and flashy Filler has looked sensational all week in Doha, and on Wednesday he kept up the frenetic pace. In the round of 16, the German obliterated Hong Kong’s Robbie Capito in 50 minutes, 11-1. Filler expected a much tougher match in the quarterfinals against 2016 World 9-ball Champion, Albin Ouschan. But after an early tussle, the 21 year old proved too much, and won handily, 11-6.

Kazakis has shown himself all week to be one of pool’s most resilient players, a never-say-die grinder whom can never be counted out. This was exactly the case in the round of 16 when he came up against the Netherlands Niels Feijen. Up 10-7, Feijen looked all set to go through to the quarters. The Greek, however, didn’t lose hope, and several mistakes from Feijen allowed him to crawl back to tie the match at 10.  In the final rack, Feijen broke and a tense safety battle ensued. Kazakis found an opening on a long pot and nailed it, then held his nerve for a miracle comeback and a spot in the quarters.

There he met up with American Corey Deuel, who had earlier kept his fine play going with a neat 11-9 win over 2015 World 9-ball Champion, Ko Pin Yi of Taiwan.  Deuel and Kazakis traded barbs for three quarters of the match and were tied at 8-8.  But after a week of steady play, the American suddenly seemed to wilt, committing several uncharacteristic errors. Kazakis kept plowing on, and he grabbed three in a row, to win 11-8 and move into the semis.

Fans around the world can watch the free live stream which can be accessed via the live scoring page here; http://www.esnooker.pl/live/en/tsnew.php

Click the tables where you see the word “Video” and you will be taken to Youtube to watch the match. Please visit the WPA Facebook Page for more information.

(Doha, Qatar)–Judgement Day at the 2018 World 9-ball Championship in Doha came and went in a flash, with just two sessions on the losers side of each of the 16 groups. And while there were the usual jangling nerves rattling throughout the cavernous Al Arabi Sports Club, one thing that was definitely missing from this year’s final day of the group stages was the complete lack of upsets.

This means that the 64 players left in the competition, who begin a single elimination, race to 11 format on Monday at 10am Doha time(GMT +3), comprise the absolute best of the very best in professional pool. Over the next several days these greats of the game will duel it out for the most prestigious prize in the sport and a $40,000 top prize. If you are a fan of 9-ball pool, buckle up and get ready for the ride of your life.

A look at the players still standing tells us a lot about the state of pool, and where the world’s best practitioners come from. The Taiwanese lead the way with nearly 15% of the players left, 9 to be exact. Next up might be a surprise to some fans but not to those who follow the sport intimately: six players from Poland qualified, proof that the sport of pool in Poland is perhaps the most vibrant in the world at the moment. 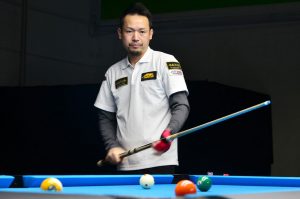 The Philippines, Japan and China come in next with five players each. The Philippines is an interesting story because many Pinoy players stayed away from this year’s championship to play in boxer Manny Pacquiao’s event in his home town in the southern Philippines. If you are hard core fan that is no doubt a disappointing development. But the 5 Pinoy’s left, including defending champion Carlo Biado, all have a shot at going far.

The Japanese have put in their best showing in years, while the Chinese players have also looked strong. A Chinese player has never won a World 9-ball Championship.(Wu Jiaqing played for Chinese-Taipei when he won in 2005).

One of the most watched matches of the day came between the Philippines Roland Garcia, a runner up here last year, and American Billy Thorpe. The two stayed close throughout the first half of the match, splitting the first 8 racks. But Garcia pounced on several mistakes by Thorpe and then piled on the racks, winning 9-5.Garcia breathed a massive sigh of relief afterward because he had lost his very first match in Doha and had to win two straight to qualify.

In a battle of two former world champions, Germany’s Thorsten Hohmann took on China’s Wu Jiaqing. Wu jumped out to a big early lead, 6-2, before the German mounted a brief fight back. But Hohmann admittedly let the match slip away with too many unforced errors, as Wu advanced 9-6. 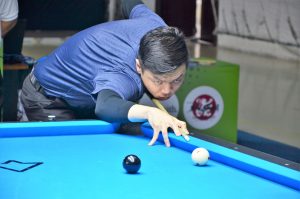 It was a proud day for the Kuwaitis who once again showed their prowess as a pool playing nation. Bader Alawadhi pulled off what could be the day’s biggest surprise when he shocked Spain’s David Alcaide, 9-7. Omar Alshaheen also booked his spot in the knockout rounds with a handy 9-6 win over Bosnia’s Sanjin Pehlivanovic.

It was also a good day for Finland. Petri Makkonen advanced with his second straight win, after taking down the always strong Chang Yu Leung, 9-6. Casper Matikainen put a halt to Filipino Marlon Manalo’s comeback with an easy 9-2 victory.

Lebanon doesn’t often feature in the business end of things here, but Mazen Berjaoui held his nerve with a break and runout in the final frame to eliminate the USA’s Hunter Lombardo, 9-8. 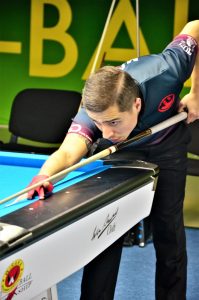 Monday’s action will be comprised of three sessions, with both the rounds of 64 and 32 being completed. The tournament will have a day off on December 18th due to it being the National Day of Qatar. The round of 16 and the quarterfinals will be held on December 19th, while the semis and final will take place on December 20th.

Play on Monday begins at 10am Doha time(GMT +3)

Fans around the world can watch four tables on our free live stream which can be accessed via the live scoring page here; http://www.esnooker.pl/live/en/tsnew.php

Click the tables where you see the word “Video” and you will be taken to Youtube to watch the match. Tables 1, 7,8,9. Please visit the WPA Facebook Page for more information.

Losers Side Matches. Losers are out. Winners qualify for the final 64 knockout stage.