WITH THE 2018 Mosconi Cup now six months away, the initial group of 14 American players has been announced. The 14 will attend a series of team get-togethers, training camps and tournaments as they work towards victory at the 25th annual partypoker Mosconi Cup which takes place at Alexandra Palace, London this December 4-7.

Of the 14 players named, over half of them have previous Mosconi Cup experience with Corey Deuel at ten appearances being the most seasoned. There are six players in the squad who have yet to taste the fiery atmosphere of the event. The final team of five will be announced at the end of October.

Commented Ruijsink, “Myself and Jeremy have chosen a big group to start with because we want to have options. We know what we are looking for in a player that represents the United States in the Mosconi Cup; professionalism, maximum commitment and focus, and a good team-spirited mentality. 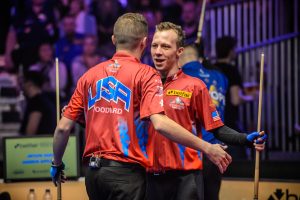 “Because of the heavy loss last year, every player starts at zero, blank. Credits don’t come from an 11-4 loss, so every player in this group has an equal chance to show his skills and abilities.

“It will be a tough but rewarding journey to get there, but myself and Jeremy are looking forward to it and will be doing everything in our power to make this successful.”

From early July, there will be a series of training camps and team gatherings mainly in the USA but with a trip to Russia to compete in the star-studded Kremlin Cup, as well as play a Mosconi Cup-style match against a team of local aces.

Most of the USA-based gatherings will be centred around tournaments while the team travel to Europe for the Cup on the 20th November to include the final boot camp in Holland and then a team match against the UK’s finest before the Mosconi Cup breaks off on Tuesday 4th December.