Austria and Holland in last eight while China A win 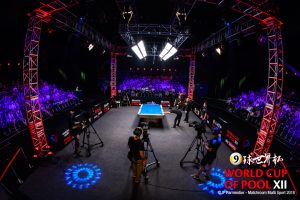 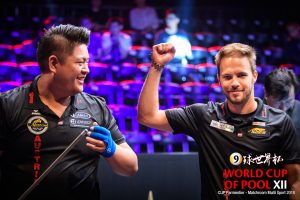 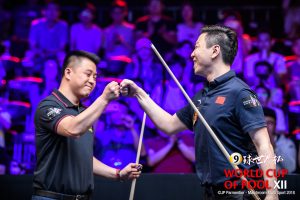 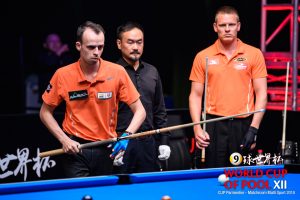 Three more matches took place at the 2018 World Cup of Pool at the Luwan Arena, Huangpu District in Shanghai, and it was China A who delighted a packed but nervous crowd as they stole a 7-6 win over plucky Estonia.

In the other two matches both Austria and Holland won through to the last eight where they will meet.

In the final first round match, China A scraped into the second round in the tournament’s first hill-hill thriller as they overcame the Estonian pair of Dennis Grabe and Mark Magi at the death. It was a thrilling match and it was Magi’s inexperience at the close which saw fortunes change.

Estonia held the lead throughout and were never behind until the 13th and final rack had concluded but it was Wu Jiaqing and Liu Haitao who took it.

Commented Liu, “It was the first match so we felt really nervous but later on we made some adjustments so hopefully next match we will play better.”

Wu felt similarly; “We struggled with the break so we will work on that. We missed the 7 in the first rack so we were chasing all the way through the match. Hopefully we will get better in the next round.”

Defending champs Austria – Mario He and Albin Ouschan – enjoyed a ding-dong battle with Poland as they overcame a large deficit to snatch victory. The Polish pair of Mateusz Sniegocki and Wiktor Zielinski held leads at 3-1 and then 5-2 as they looked big favourites for the win. However, Austria dug in and pulled themselves out the mud to book a quarter-final berth.

“We could have gone 2-0 up but they got pretty lucky at 1-0 and then they ran out the next two racks and we were down again. Like in the first match, we knew to stay cool and if we get the chance we take it,” said Ouschan.

“We will play Holland next, a big-name team who have played really well. It will be an interesting match.”

In the final match of the session, the aforementioned Holland rode their luck to dispose of Scotland 7-2 and book a quarter-final match with Austria.

Commented Feijen, “We waited all day long for the final match and there was some pressure on us. We were breaking really well and we tried to stay positive but we can play a lot better.”

“It was one of those matches – I feel bad for Scotland as we could have gotten punished. I’m glad to get it over with and onto the next match.” 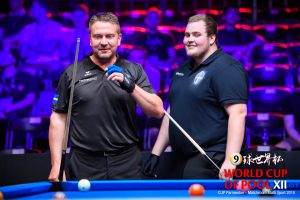 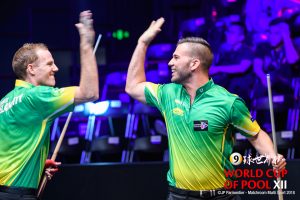 Two of the unseeded sides upset the applecart as they made their way into the second round of the 2018 World Cup of Pool against fancied opposition as three further round one matches took place at the Luwan Arena, Huangpu District in Shanghai.

The Australian pair of James Delahunty and Justin Sajich became the first Australian team to win a match at the World Cup of Pool as they progressed at the expense of the fancied Russian pairing of Fedor Gorst and Ruslan Chinakhov.

A delighted Sajich said, “It was tough out there, we were nervous but we fought hard, kept it together and we managed to pull it off. I think we knew we were the underdogs, although we wouldn’t have admitted it to each other. We will go back to the pool hall before the next round. We have been practicing six hours a day since we got here.”

Delahunty was equally thrilled, “We knew it wouldn’t be an easy match and we had to play as well as we could and I think we performed pretty well. We didn’t miss many pots and that’s what we needed to do. We weren’t looking too far ahead in the draw but we will have to play well in the next round – it is on us again, if we play well then we give ourselves the best chance to win.”

Earlier, underdogs Sweden (Christian Sparrenloev-Fisher and Tomas Larsson) put in an equally fine performance to bring down the fancied Japanese duo of Naoyuki Oi and Toru Kuribayashi. The score was 7-5.

Fischer said, “We are really happy, of course. We knew we needed to play well to win it and we played okay. We know the Spanish players well, they are friends to us and we know we can beat them, we just need to play our game and anything can happen.”

Finally, in the opening match, Finland looked a bit shaky but still had too much for the Malaysian duo of Muhammad Almie and Darryl Chia. 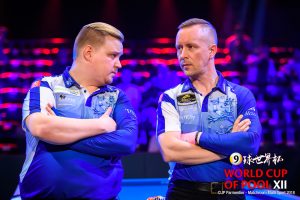 Mika Immonen: “It wasn’t our best performance but we got through. We played better at the start of the match even though we were settling in. Then we gave them a little window, but they didn’t take it.

Play continues on Thursday evening with the final first round match and two second round matches.