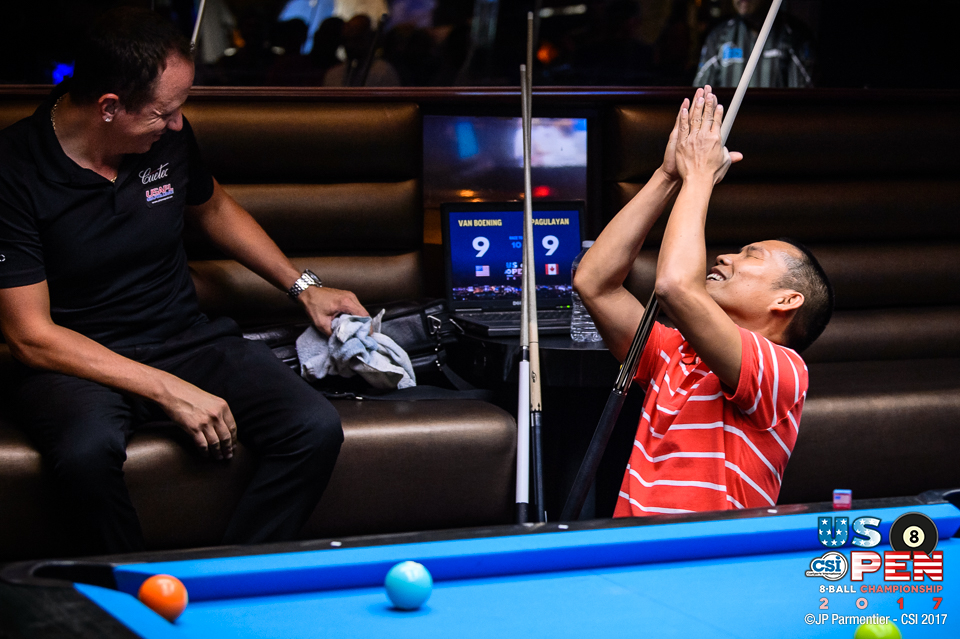 Pagulayan’s path to the finals included wins over: Danny Stone, Australia, 8-6; Skyler Woodward, Kentucky, 8-2; and Denis Grabe, Estonia, 8-3; before losing to Dennis Orcollo, Philippines, 7-8. In the loser’s bracket, Pagulayan bested Thorsten Hohmann, Germany, 8-7 and Lee Vann Corteza, Philippines and then gained revenge on Orcollo in the semi-finals, beating him 8-6.

Van Boening’s path to the hot seat included wins over Sina Valizadeh, 8-2; Manny Perez, 8-5; Josh Roberts, 8-3; Lee Vann Corteza, 8-6; and Dennis Orcollo, whom he beat 8-4 to gain the hot seat, to meet Pagulayan in the finals.

Van Boening jumped out to a fast 7-2 lead, which may have seemed insurmountable to all but Pagulayan. But as Van Boening’s breaks came up dry, Pagulayan was able to capitalize, slowly closing the gap and soon the score was tied at 8-8. The score was tied again at 9-9 in the race-to-10 final, with Van Boening breaking. But once again the break failed Van Boening, with the cue ball scratching – giving Pagulayan an opportunity at the table, which was all he needed. With ball-in-hand, Pagulayan was able to run out to earn the US Open 8-Ball Champion title, cup and $13,500 purse.

The 2017 US Open 8-Ball was held at Griff’s in Las Vegas in conjunction with the 41st BCAPL National Championships, July 19-29 at The Rio All-Suite Hotel & Casino. Sponsors include Viking, Kamui, Omega Billiards, Cyclop, Diamond, Simonis, and Predator.