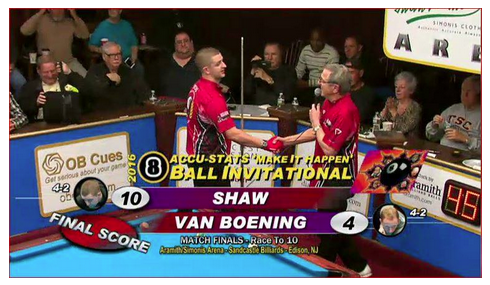 Congratulations to the Champion of the
2016 “Make It Happen” 8-Ball Invitational
Jayson Shaw on an outstanding performance!

Jayson Shaw issued a statement that he was ready to avenge his loss in the previous match with a break and run. He then ran out game 2 after Van Boening broke dry.

One of the very best position plays of the week came in game 3 when Shaw drew back 4 feet to a microscopic shape zone for the key ball to the key ball. He completed his second break and run to take a 3-0 lead.

Van Boening came back strong with a break and run, then made three super shots in a row to close out the next game. He now trailed, 3-2.

In game 6 Van Boening pounded the balls on his break, but nothing fell and Shaw ran out, then broke and ran out to extend his lead to 3 games.

They split the next two games. Then, in game 10 Van Boening left the cue ball way to close to the 8-ball, missed, and Shaw cleared off the roadmap layout.

In game 11 it looked like Van Boening had a chance to begin a comeback, but he committed a huge position play blunder, then missed a long shot to a partial pocket and Shaw ran out. He now led, 8-3.

The two traded safeties before Van Boening continued his run of subpar play by missing while attempting to break out a ball using a super hard pound stroke. Shaw missed in game 13 and Van Boening ran out. But in game 14 Van Boening faced a miserable layout after making a ball on the break. He missed a long shot and Shaw ran out to win the match, 10-4, and the title.

Six of the most talented professional players
were selected to compete in this year’s
Accu-Stats’ “Make-It-Happen”
8-Ball Invitational.