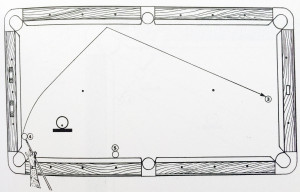 Shooting in the rail with draw makes the cueball path curve. Here you not only escape without hitting the 4-ball by compressing the rubber, you hit the 3-ball at the other end of the table. The 3-ball, incidentally, is a ball width from the right end rail, making it a big target for the player trying to escape from the hook. When laying down a safety try not to leave the target ball close to a rail. Note the second cueball trapped behind the 5-ball. By using the sink-in technique, from this position you can hit a second ball no matter where it is on the table. In some cases you will need to use two or three rails