FOLLOWING ON from his last 16 finish at the recent Dutch Open on the Euro Tour, Holland’s much decorated Niels Feijen can ready himself for his 11th appearance pulling on the blue European jersey at PartyPoker Mosconi Cup XXII at the Tropicana in December.

The athletic Dutchman first competed in 2001 when Europe was hammered at the York Hall. His next two appearances also saw defeat before he became part of the group of European players who enjoyed almost total domination of the event from 2007 onwards.

The 38 year-old Feijen will become tied third on the European list of appearances as well as tied fifth on the Mosconi Cup all-time appearances list. In addition, the sharp-shooting Feijen has won the MVP award three times in the last four years – a record for the event.

“The Mosconi Cup was one of my goals again this year and it’s very cool to obtain the first ticket,” said a delighted Feijen.

“I’m looking forward to the venue in Vegas, cause I heard it’s gonna fit 1,000-plus people. After last year I want to see how that’s going to look and most of all sound like. Last year was already epic!”

Despite a long run of recent successes, Feijen is showing no signs of complacency; “In short, if you underestimate the USA, you’re done. All their players have a lot of heart and know how to win events. But as always, we will focus on our team and our job is to hold the Cup in the air on Thursday!

“We can’t take our success for granted but I think first of all, Europe has been more of a team in the last years. Second I think the USA is in a changeover phase, which means more young players are coming on board and the older champions will have to make room. They will gain experience and get stronger in this event. You can’t beat experience in this pressure cooker.”

The Dutchman has hazy memories of his debut at the York Hall in December 2001, and could have been forgiven for predicting a glittering future in the event following that shattering experience;

“All I remember is Mika and myself coming out on fire and winning the first point. After that it was one big foggy cloud. How can a group so strong not win one more point!? And to lose 12 in a row? I was very pleased to return the favour two years ago by winning 11-2!

“Over the years, I’ve enjoyed playing with all my doubles partners. However I won four out of four with Souquet in Malta one year, which was super special. Also the epic match with Nick van den Berg at the York Hall, where he jumped the ball in with the bridge and I made that super long shot right after was something that still gives me goose bumps. The sound in that room at that moment was indescribable!”

Those are sweet memories but Feijen is fully aware that they will count for nothing when hostilities get under way on Monday 7th December and he prepares accordingly.

“Personally I want to give 200% in my preparation like 7-10 days before the event starts. I totally avoid social media and the hype, because once you step into the arena you will feel all the excitement you need so you don’t need to hype it even more. But that’s personal. I try to avoid distractions to clear my mind as much as possible so my focus can be super strong.

“When a group of five individual athletes really come together for seven days and have only each other to rely on at the table – that is what the Mosconi Cup is all about. If you want to win that Cup, you can’t do it alone.

“You can only score 2/3 singles points all by yourself, so what does that bring you? You have to do it all together! And you can feel when it’s real and you all feel the same. That’s when it’s special and you are like an army of warriors,” he added.

With Feijen the first name on the European team sheet and Albin Ouschan in a very strong position to take the second spot, there will be everything to play for as up to seven players battle for the final two spots at the US Open in Chesapeake from 24th to 30th October as well as the two wild card picks.

At the close of the qualification series, the No.1 ranked player on each of the three lists will be named as part of Team Europe as they look to defend their title in Las Vegas from 7th to 10th December.

Taking place from Monday December 7 to Thursday December 10, the Europe v USA showdown is hosted by The Tropicana in Las Vegas and will be the 22nd annual running of pool’s biggest event. Each team is made up of five players – three from the PartyPoker Mosconi Cup rankings with the remaining two wild-card picks. 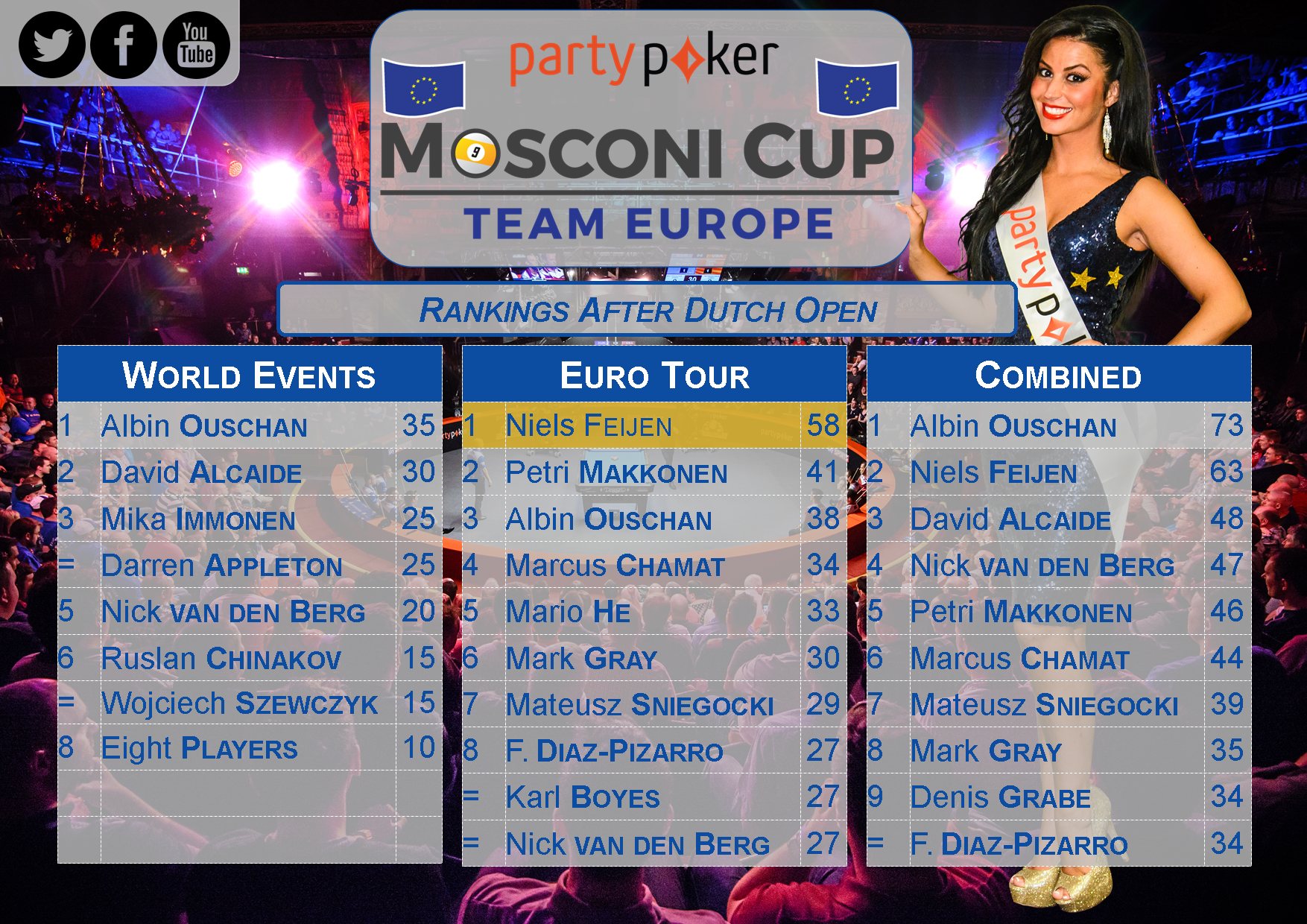