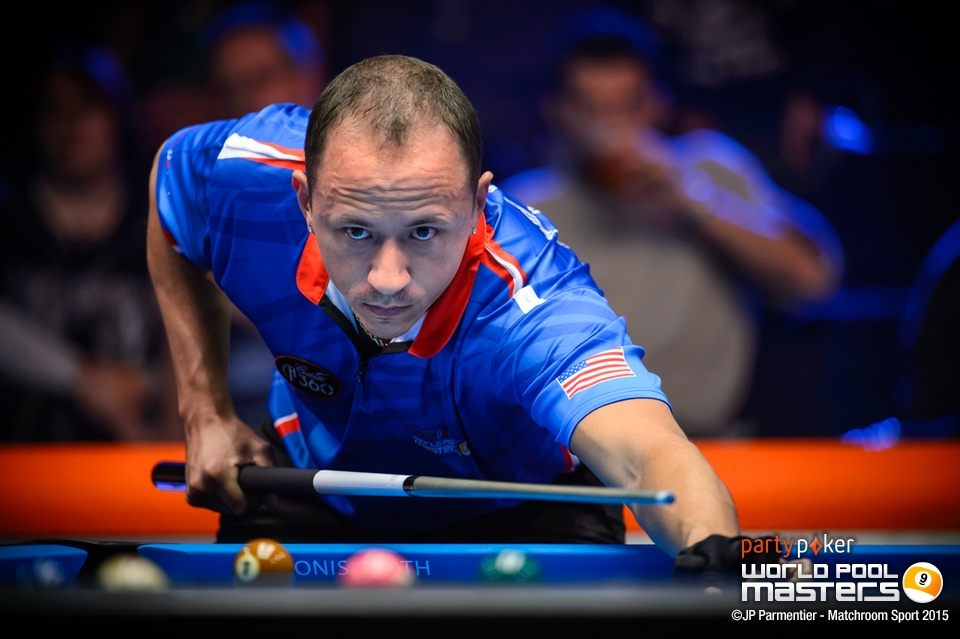 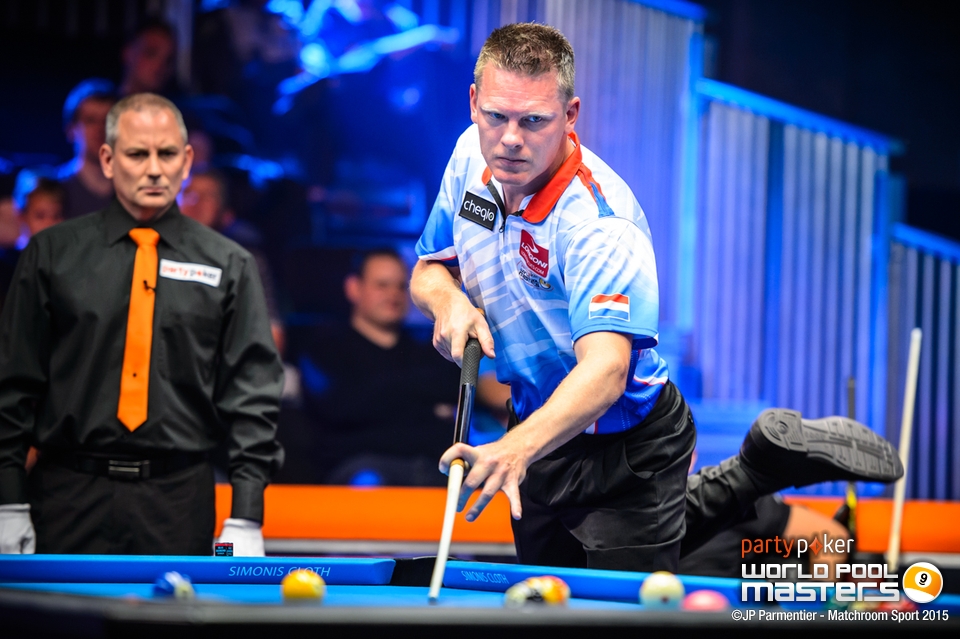 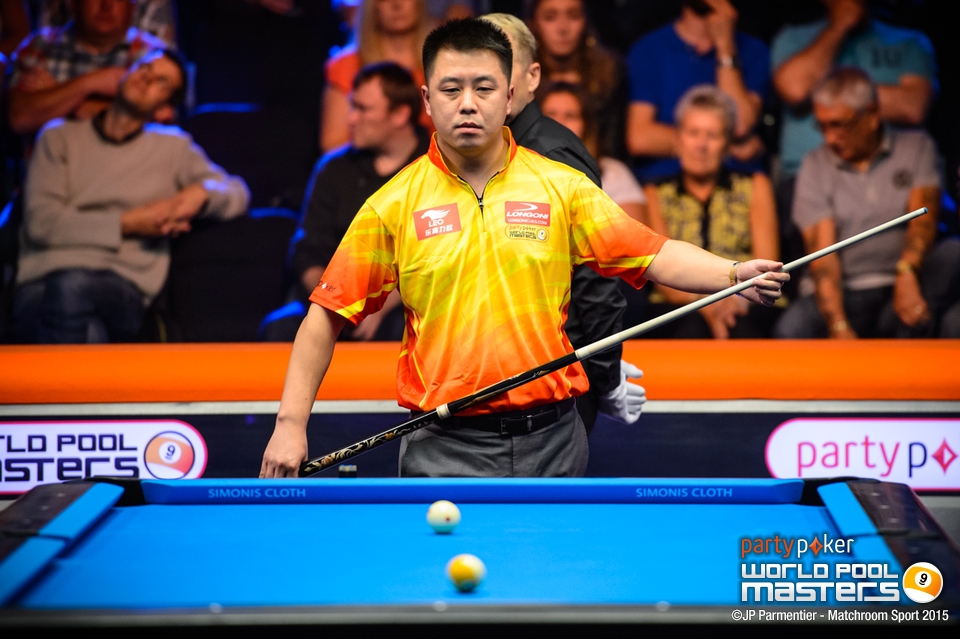 There were three wins for the three seeded players as the 2015 PartyPoker World Pool Masters got underway at the Victoria Warehouse in Manchester on Friday evening. In front of an enthusiastic crowd there were wins for defending champ Shane Van Boening, 2013 victor Niels Feijen and China’s Liu Haitao in the final match of the session.

Liu had faced England’s Karl Boyes who had enjoyed some rowdy support in the arena. It was an absorbing encounter with the most dramatic of endings as Boyes came back from 7-5 down to level the match at 7-7.

The final rack came down to the last two balls as Boyes looked to complete an exhilarating run out for the win. After an array of outstanding shot making, he missed the easiest of 8 balls, a short prod into the top corner pocket. The crowd were stunned and it gifted the match to Liu. The Chinese knocked the hanging 8 ball in and the left himself a long cut on the 9 but pulled it of to move into the quarter finals.

The Chinese star had always led as Boyes struggled to get going but the Englishman stuck with him. When his chance came at the end he took it, up to a point.

“I still feel very excited by the win because Karl Boyes is a great player and the atmosphere was very excitable,” said Liu.

“Karl is a top player and it was almost impossible for him to miss that shot. I will try and keep the same attitude against Niels Feijen and hope I can play as well in that match as today.”

For Boyes it was a big disappointment after working hard to get back in the match; “It was crazy, I cannot explain what has gone on there. I took two good racks out to get to 7-7, played a good safety in the last rack and he scratched to give me ball in hand.

Van Boening became the first defending champion to make it past the opening round since Dennis Orcollo in 2011, as he came from behind to get the better of Canada’s John Morra as he opened his Masters defence.

He got off to the shakiest of starts as he missed an easy 9 ball in the opening rack to gift the lead to Morra but recovered to level and they shared the next two racks to take it to 2-2. Morra, who was a recent finalist in the China Open in Beijing, took the next and after Van Boening scratched in a safety exchange. With ball in hand he ran out for a 4-2 lead.

The Canadian extended that in the next before a poor safety gave Van Boening a great chance and he calmly ran out to trail 5-3. A break and run the ninth game made it 5-4 before Van Boening missed the 2 ball by some distance. They both had goes at the 2 between safeties and missed it a total of four times, before the American downed it to take the initiative and level the match at 5-5.

That went to 6-6 and sensing he needed to do something, Van Boening took the next to take the lead for the first time since 2-1 and put himself on the hill. He made no mistakes as he ran the final rack and an 8-6 victory.

Commented Van Boening; “There was a lot of pressure out there – usually the first match is always tough and I will probably have to regroup tomorrow. I will go back and focus on the times I played well; my US Open finals and when I won the World Pool Masters last year.

“At 5-2 I had to take a bathroom break and regroup and try and get the pressure out of my body. I made too many mistakes so I am going to be working on my shots but the first match is the most important match of any tournament. I know the table now.”

Reigning World 9 Ball Champion Niels Feijen got the better of opponent Marcus Chamat (Sweden), who potentially may be his captain at the PartyPoker Mosconi Cup later in the year.

Chamat was a late entry into the event following the withdrawal of Peruvian star Cristopher Tevez and held his own against Feijen as they shared the first half of the match for 4-4.

Neither was playing their best but it was a close thing as they shared the next before Chamat drilled home the 9 ball in the 11th to take the lead for the first time since the opening rack at 6-5.

Two balls on the break set the rack up for Chamat but he unfortunately scratched as the cue ball fell into the corner pocket and that gave Feijen the opportunity to level the match at 6-6. The Dutchman reached the hill in the next as he ran out from the break and he held himself together in what was the last to crush his break shot and run the table to reach the second round.

“It was a rollercoaster match. I took the lead 4-2 and settled down pretty well but then Marcus fired back at me with two games for 4-4 and it was anybody’s match,” said Feijen.

“We were both playing pretty solid and a couple of weird things happened; a 9 on a break for me, he had a kick on the 6 where I missed the nine after that. I think it was an exciting match for the crowd.

“Luck is such a big think in 9-ball and you have to take it on your chin. You need to play your best and that will usually decide the outcome in the end.

“I am one step closer to the goal line, with three more matches to go. I will stick around and watch a couple of games but I have to focus on my game, not on theirs.” 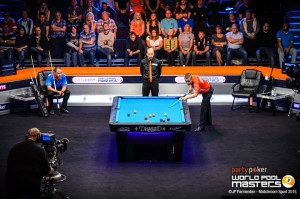 Pool’s biggest invitational event, the PartyPoker World Pool Masters features 16 top players from around the world competing for a $70,000 prize fund and the prestigious title. There is a high-quality stream available for $19.99 through www.matchroompool.com

Tickets are priced at £5 for Saturday and Sunday afternoon, and £10 for the Saturday and Sunday evening sessions. To catch all the 9 ball action there is a great value season ticket taking in all sessions for just £30 available from the venue Box Office.