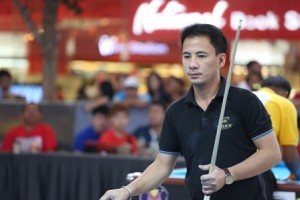 ORCOLLO PULLS A SECOND GREAT ESCAPE
The Philippines Dennis Orcollo wins his second straight 9-8 match in as many days to advance to the knockout stage of the 2015 World 10-ball Championship in General Santos City.
By Ted Lerner
WPA Press Officer

(General Santos City, Philippines)–Filipino pool players have a standard answer when asked by the media, “How did you play?” Even if they just played the greatest round of pool in the history of the sport, the comeback will invariably be a humble, “I’m just lucky.”

World number 7 Dennis Orcollo is definitely not being humble today as he profusely thanks the pool gods for the good fortune he’s been the beneficiary of here in General Santos City in the southern Philippines. For the second straight day Orcollo pulled a great escape from what looked like sure defeat, winning 9-8 yet again, and  advancing to the single elimination round of 64 at the 2015 World 10-ball Championship.

Playing against Pampanga’s Roland Garcia, Orcollo looked to be cruising into the knockout stages with an 8-5 lead in the race to 9 alternate break match. Garcia, though, stormed back and had only five balls left on the table for the win when, inexplicably, he touched and moved the 8-ball with his hand while lining up a shot on the five ball. Orcollo leapt out of his chair, said a quick thank you to his Lord, and cleared the colors for the win.

“I’m really lucky today,” Orcollo said afterwards and this time you knew he meant it. “I didn’t think I would even get back to the table. I still can’t believe I won that match.”

31 other players are feeling as relieved as Orcollo as they also booked their spots in the final 64 which begins on Wednesday evening. For another 32 players, however, the dream of world pool glory crashed and burned as they each suffered their second defeat in as many days, which meant they were eliminated from the event.

The field for the final 64 will be filled after the first three sessions tomorrow in what promises to be a day of drama and nerves.  Judgement Day in championship pool often makes otherwise reasonable men lose their minds, as the prospect of possibly being in contention for a world title suddenly dawns on them.

Many of those who have already qualified don’t seem to be in any danger of losing their cool any time soon. World number 1 Chang Yu Lung of Taiwan continued to fly under the radar today with another superb performance, beating Finland’s Petri Makkonen, 9-5, to advance. I say “under the radar” because Chang, with his stoic and emotionless demeanor, attracts little to no attention. If you watch him closely, however, he plays fearless pool and that quiet confidence will surely carry him far in this event.

With a third of the field of 128 players, the Philippines was a lock to dominate the  final 64 and several notable names have looked exceptionally good so far. Jeff De Luna has given up just one rack in two matches and he could very well find himself the number one seed in the knockout rounds. Other Filipinos advancing today with fine performances were Francisco Bustamante, Alex Pagulayan, Lee Vann Corteza, Warren Kiamco, Roberto Gomez, Elmer Haya, Antonio Gabica, Raymund Faraon, and Carlo Biado.

When boxing legend and hometown boy Manny Pacquaio brought the World 10-ball to General Santos, one of his aims was to give the legions of lesser known Filipino pool players the chance to shine and this is exaclty what is taking place at the SM Mall. Several of the younger and not so well known Filipino players also advanced today and it’s clear that several will be establishing their credentials here this week. One of those looking to make a name for himself is Roland Dela Cruz, a relatively unknown Filipino who took down two-time World 9-ball Champion Thorsten Hohmann on the losers’ side. Hohmann’s early exit represented the biggest upset so far in this year’s event.

England’s Darren Appleton came up against two young Filipino players today.  Appleton, the 2008 World 10-ball champion, has spent enough time this country to know that top notch pool talent is waiting every corner in every city in the Philippines. To take anyone lightly is akin to pointing a gun at your own head. After handily defeating Angelo Ariola 9-2, the Englishman found himself in a tight tussle with Ruben Cuna. Appleton had to fight to the finish to advance to the Final 64 with a well-earned 9-7 win.

Afterwards, Appleton revealed he knows not to take any of the Filipinos lightly and in fact, he employed a strategy to thwart any chance of an upset.

“He’s a good young Filipino player,” Appleton said of Cuna. “My experience got me through that one. I played two Filipinos today and my game plan was to not show any emotion, not show any weakness to them. Because obviously they are very young and they’re not used to tournament play. They are not used to playing big names so I think that helps in the end because he missed a couple of balls that he wouldn’t miss in the pool room. I wanted to make him work for it.”

The group stages will finish up on Wednesday over the first three sessions. The round of 64 in the single elimination stage begins in two evening sessions Wednesday, and continues Thursday morning over  one session.

The semi-finals and final will take place on Saturday.

**The 2015 MP Cup World 10-ball Championship takes place at the SM Mall in General Santos City, Philippines   from February 15-21 and is sanctioned by the World Pool & Billiard Association(WPA), the world governing body of pool.

The WPA will be on hand in General Santos throughout this year’s World 10-ball Championship providing up to the minute information, photographs and in depth articles with insights and analysis from WPA Press Officer Ted Lerner.

Results Winners side matches. Winner qualifies for Final 64. Loser gets one more chance.

Results Losers Side Matches. Losers are out, winners get one more chance to qualify.