“‹
THE FINAL FOUR REACH FOR POOL IMMORTALITY
Climactic final day looms as Korea’s Ga Young Kim takes on China’s Liu Shasha, while China’s Chen Siming battles Taiwan’s Tan Yo Hun at the Women’s World 9-ball Championship.
By Ted Lerner
WPA Press Officer
Photos Courtesy of Tai Chengzhe
(Guilin, China)–The 2014 Women’s World 9-ball Championship has come down to the final four, and with the biggest prize in women’s pool to be decided on what promises to be a dramatic Saturday in southern China, fans around the world are clearly in for a treat of the highest level. 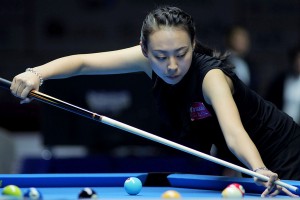 In the first race to 9 semi-final, which begins at 12pm(GMT +8),  Korea’s Ga Young Kim will take on China’s Lui Shasha. The match will be a battle of former champions; Kim won the Women’s World 9-ball Championship in 2004 and 2006, while Lui won the title the first year the tournament was played in China in 2009 at the incredible age of just 16 years old.

The second semi-final, which will take place at 2pm, will feature China’s Chen Siming against Taiwanese veteran Tan Ho Yun.

The race to 11 final will begin at 6pm Guilin time.

It was a grueling day of championship pool as the field was whittled down from 32 players to four players over three tough sessions. Actually for Kim and Liu, their round of 32 match was played the night before so they only had to play two matches today. But their road to the semis was no less easy, especially for Kim.

The Korea superstar, who speaks fluent Mandarin and is quite famous throughout China, must feel more than a little charmed at this point, as she has been living on the edge of disaster over the last few days only to miraculously survive and find herself on the cusp of her third 9-ball crown. In her round of 32 match the night before against China’s Wang Xiao Tong, Kim was all but out of the tournament as Wang got down on a straight in 9-ball to win the match. Incredibly the Chinese missed and Kim stole the rack, then won the next rack to advance to the round of 16. 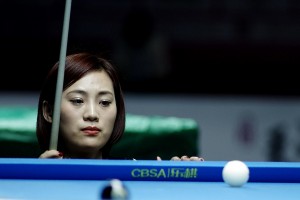 Kim came out today and played solid in a 9-5 win over Japan’s Akimi Kajatani. But she was then faced with the prospect of moving over to the TV table to play defending champion Han Yu of China. The clinical Han had looked untouchable up to this point and had just destroyed one of China’s biggest stars, Fu Xiao Fang, 9-3, to move into the quarters.

Against the merciless Han, Kim jumped out to a 2-0 lead but then saw Han move up by 2. Han continued to hold off Kim the rest of the way until Kim finally caught up to tie at 8-8 and force a sudden death decider. In a pressure packed last rack, the pair handed over the table several times but it was Kim who grabbed the last 9-ball and a hard won spot in the semi-finals.

Kim will now have to face another Chinese superstar in Lui Shasha. The 21 year old has, as usual, looked unflappable all week and she played that way today. She first outlasted 14 year old fellow Chinese Jiang Teng, 9-5. Liu then did the same to the surprising Angeline Magdalena Ticaolu of Indonesia. The 29 year old Ticaolu showed a huge heart this week and her spot in the quarters is the best that any Indonesian player has ever achieved in a world championship. But Liu was in no mood to be kind and took over the match halfway and won 9-5.

Afterward a smiling Liu informed the surprised media throng that she hasn’t been feeling 100% throughout the week in Guilin.

“I feel so relieved right now,” Liu said. “From day one until right now I haven’t felt that good on the table. I don’t think I’m playing very well. It’s just a huge relief right now and I feel very very happy.”

Although Liu has won this event once before back in 2009, she said there is a world of difference between then and now.

“Five years ago before I won the title I’m nobody so back then I was just playing for fun and there was no pressure,” she said.  “But right now I have a lot of pressure from the national team, from my family, from all the fans and even from myself.  My coach told me to try and change all the pressure, to use it to my advantage, just try and stay positive and not worry so much. I just have to control my emotion, stay focused and get excited about the pressure.”

Liu, at least, can always remind herself in times of trouble that she has won the big one before, which is something at her fellow national team member Chen Siming can’t do.  Not yet anyway.

Of all the world class talent that China has produced, close observers of the game here over the last five years are near unanimous in declaring Chen as perhaps the greatest natural talent of them all. Her fluid stroke and dead eyed potting skills are a thing of beauty to behold. But the 21 year old Chen has yet to fulfill the promise that so many have invested in her by winning the big one. On top of this, she has watched as her fellow teammates like Liu, Fu and Han have grabbed the world crown, while she has had to endure a series of bitter disappointments. In 2011 Chen reached the finals only to lose to eventual champion and teammate Bi Ju Qing.

Over the last three days, however, Chen has looked as solid as ever and fans have been quietly whispering that perhaps this year might be her time to shine. She certainly looked the goods today with three terrific performances. Chen first routed Germany’s  Jasmin Michel 9-3. Next she handily beat a very solid Chou Chieh Yu of Taiwan. In the quarters she also squeezed the air out of another tough Taiwanese,  Wei Tzu Chien, 9-5. 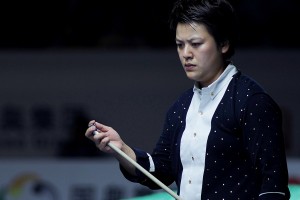 With a semis spot in the bag, Chen was more than ready for the inevitable “Can she finally do it?” questions from the media scrum. Her answers indicated a self-belief that perhaps wasn’t there a few years back.

“Of course tomorrow the pressure and tension will be totally different from the rest of the week,” Chen said. “But I will adjust myself and I’ll be ready. I don’t really care who my opponent is, I just have to play my own game.

“Every time before when I lost a big tournament I just use it as a learning experience to come back better the next time. So I was never really disappointed. I just keep practicing hard. So we will have to see what the answer to that is tomorrow.

“The biggest difference with me from before is my attitude. Before I always think and worry about the competitor, and how she plays and I’m not even thinking about myself.  Now I don’t think about who my opponent is. I just focus on the table and focus on myself and my game. ”

That certainly appears to be good advice because Chen’s opponent, Tawain’s Tan Ho Yun, has the luxury of being able to play under the radar. And Tan has got serious game as she reached the quarter finals here the last two years, and has now beaten her best by grabbing a semis spot this year.

The 31 year old from Khaosiung in southern Taiwan put in a workman-like performance today first taking down Japan’s Masami Nouchi, 9-3, then three time former champ Alison Fisher, 9-5, before coming back to beat China’s Zhou Doudou by the same score.

Afterward, the veteran Tan, who has been playing professionally for 16 years, revealed a little known fact that would indicate why she has not only played so well this week, but why she is brimming with confidence and feels she can finally go all the way. She spent the last month being mentored by none other than 2000 World 9-ball Champion, Fong Pang Chao, aka “the cold faced killer.”

‘I ask him why I lose every time,” Tan said. “He told me just find the best line, the best path to take the ball.  A lot of times, I picked the second best path, or the third best. But he showed me how to find the best path, how to think. He said if you find your best path, you can just relax and you can win. He is a world champion. His mind is amazing. It’s very clear when he plays and he taught me how to keep a clear mind.

“I wish I can win tomorrow. I just have to do it, for my coach Fong Pang Chao.”

**The 2014 Women’s World 9-ball will be held in Guilin, China from October 13-18, and is sanctioned by the World Pool & Billiard Association(WPA), the world governing body of pool.  64 women players from across the globe will compete for the biggest prize in Women’s Pool.