ROUND OF 32 BEGINS IN A WILD RIDE

With the knockout stages underway at the Women’s World 9-ball Championship in Guilin, China, the pressure is already proving too much to bear for some players.

(Guilin, China)–If you like your pool to resemble a roller coaster ride with plenty of hair raising twists and turns, then the next two days here at the Women’s World 9-ball Championship in Guilin in southern China will surely be everything you could have ever wanted.

This prediction is based on the drama that transpired today inside the Guilin gym, where Judgement Day jitters affected not only the wannabes, but even the sport’s biggest stars. Even straight in 9-balls normally made a thousand out of thousand times in practice were bobbling in the jaws under the intense pressure. 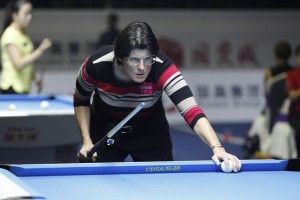 The first order of play today was to trim the field down to 32 where the players would switch to a single elimination knockout, race to 9. (If anyone had any doubts that Asia is the dominant region in pool, they were erased when eyeing who made it through to the Final 32: all but 5 players were from Asia.)

After the draw and a break for dinner, the first 8 matches in the last 32 commenced. As could be expected things didn’t get any easier as the surprises and missteps continued like a domino effect throughout the arena.

Korea’s Ga Young Kim, certainly one of the top five favorites to win here this week, escaped out of her group with narrow 7-6 win over former world champion Shin Mei Lu of Taiwan. In the single elimination round of 32, Kim came up against young and talented Chinese player Wang Xiao Tong. The multi-awarded Kim was a clear favorite, but this event is no ordinary tournament. When Kim found herself in her chair down 8-7 in the race to 9, and Wang shooting a very makeable 9-ball for the win, the Korean star must have known it was curtains. Incredibly Wang missed the easy 9-ball as the crowd gasped in horror. Kim won the rack and then won the decider to stumble into the last 16.

2012 champion Kelly Fisher had a day she won’t soon forget, although she’d probably prefer to get a case of amnesia about now. Up 6-4 in a race to 7 in the last match of her group, Fisher missed a 9-ball to qualify, then watched opponent Wu Jing of China storm back. With the match in hand, Wu missed a near straight in 9-ball for the win. Fisher escaped into the final 32. 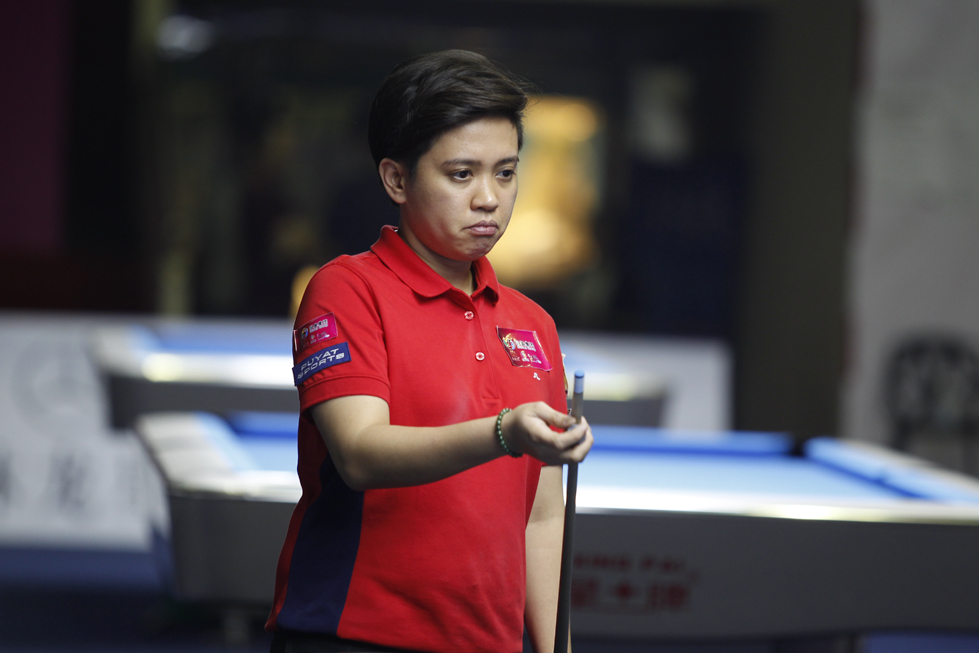 There she met up with arch rival and 2010 World 9-ball Champion, Fu Xiao Fang. This match screamed “Marquee!” and was rightfully played on the TV table, and shown on China state television channel, CCTV, to an audience numbering in the millions.

With several miracle escapes behind her, Fisher freewheeled it and put on a brilliant show, holding a commanding 8-5 lead in the race to 9 match. Fu, however, clawed back to tie to force a pressure packed one rack decider. The Brit’s wild ride of a tournament finally came to an end as Fu grabbed the last rack and advanced as Fisher was sent packing.

Taiwan’s Kuo Azu Tinh is relatively new the scene but had the Philippines’ Rubilen Amit down 8-5 in their round of 32 match. But with one rack to go, Kuo looked like she was caught in one of those bad nightmares where the prize keeps getting further and further away. Up 8-7, Kuo had a straight in 9-ball for the win but, like others before her, the 9 bobbled in the jaws. Showing her mettle, however, Kuo broke and ran the final rack and advanced to the final 16.

It wasn’t all drama, tension and tragic near misses today.  Defending champion Han Yu continued to show why she is still the favorite to win with two scorching performances.  Han first beat fellow Chinese Gao Meng 7-1 to win her group. In the round of 32 , Han  toyed with Singapore’s Hoe Sur Wah, winning 9-1.

Han, the world’s number one ranked player, doesn’t exude quite the amount of glamour that the more famous Chinese stars such as Pan Xiao ting and Fu Xiao Fang exhibit. But that seems to suit the low key red head just fine. Her play on the tables is downright clinical. After advancing to the round of 16 Han said that while she feels the pressure of the fans, she just sticks to what she knows best; practice, practice and more practice.

“There’s a lot of pressure on me but I just try and use the pressure to make me more active, to keep moving forward,” the 22 year old from Heibei province said through an interpreter.  “I’m not really playing perfect at the moment and I can know I can play better.

“After the World 9-ball last year I didn’t play well for a few months but the national team coach, Mr. Chen, taught me how to keep my emotions under control and to try to be more stable and try to control myself. I don’t like to think too much. I just try to stay focused.

“The only time I go out in public is when we are doing things for the national team or for my sponsors. The rest of the time I mostly hide somewhere private so I can practice more. I haven’t really gotten used to this life, to being in the spotlight. I’m a very low key person. ” 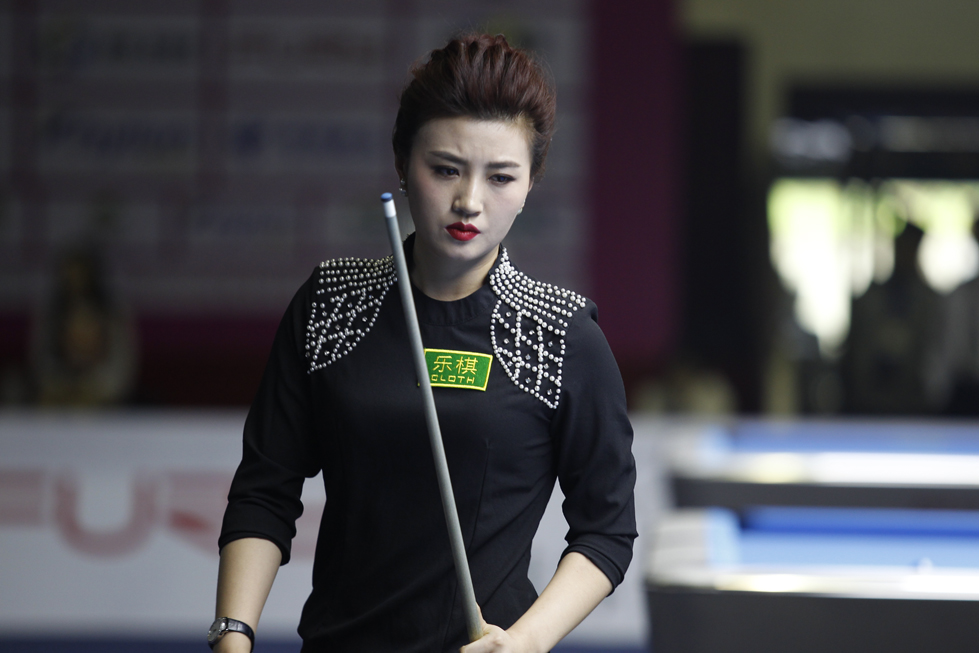 China seems to produce an endless stream of pool talent these days and one youngster has really made her mark this year. 14 year old Jiang Teng-yes that’s right, 14 years old– won two straight matches in her group to qualify. She then came out in the round of 32 and took down former world 9-ball champion Liu Shin Mei, 9-5.

2009 champion Liu Shasha also advanced to the round of 16, as did Japan’s Akimi Kajatani and Indonesia’s Angeline Magdalena Ticaolu.

The second set of 8 matches in the round of 32 will begin on Friday at 1pm(GMT +8.) The TV table match is sure to draw tens of millions of fans from around China as the Chinese sporting legend Pan Xiaoting takes on the USA’s Jeanette Lee.

After Friday’s play, the field will be down to the Final Four. The semis and final will be played on Saturday.

*The 2014 Women’s World 9-ball will be held in Guilin, China from October 13-18, and is sanctioned by the World Pool & Billiard Association(WPA), the world governing body of pool.  64 women players from across the globe will compete for the biggest prize in Women’s Pool.

RESULTS LOSERS SIDE MATCHES
Winner goes through. Loser is out.