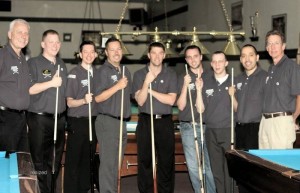 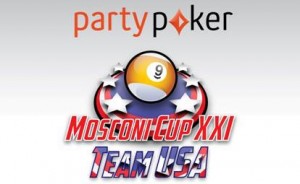 In preparation for the PartyPoker Mosconi Cup XXI to be held December 1st through 4th in Blackpool, England, we assembled Team USA in San Diego, California for our very first team get-together.

In our first team meeting we covered the tentative schedule for the year, and discussed what is expected of the team.  Honor, integrity, professionalism, and dedication to training were discussed as the goals for the team.

We introduced Lieutenant Commander (retired) Amir Pishdad, a legendary Navy SEAL, who was our host for the weekend.  Amir is an extremely inspirational and motivational speaker, and he is expert in the principles of intense training, and the true meaning of honor, integrity, and teamwork.

His assistance, inspiration, and motivation were such that by the end of the weekend, the team made him an honorary member of Team USA; and we hope to have him present to advise us during the Cup competition in Blackpool.

On May 23rd we were allowed the rare privilege of visiting the Navy SEAL training center in Coronado.  The team was able to see first-hand the extreme dedication and work ethic of our nation’s most elite warriors.  We exposed the team firsthand to the SEAL principles of “no excuses,” work harder today than yesterday, work harder than you thought you could, work harder than your opponent, be relentlessly positive, and honor above all else.

We also gave them a powerful example of the real meaning of teamwork – as the SEALs know, it is not just cheering during a match, it is relentless and grueling training during the year so you do not let the team down.

On May 24th we held a clinic for local players at On Cue Billiards in La Mesa with all proceeds donated to the CalDiego Paralyzed Veterans Association.  We wanted to assist the players in developing the expertise to give a polished, entertaining, and professional clinic – something that will help them in the future make a better living in the sport.

There was a big community turnout and media coverage; and the participants were thrilled with the experience.

That evening, we held a Mosconi Cup style match against the best San Diego players the room could find.  We won 11-4 (Oscar’s father Ernesto Dominguez played for San Diego, and was responsible for two of their four victories).

We had an excellent turnout of spectators; and a much younger audience than is usual for a pool competition.  Though the level of play was stellar; the behavior and sportsmanship of our players was exemplary – something everyone now realizes is essential if our team is to change the face of the sport and become a serious threat to regain the Mosconi Cup.

On Sunday May 25th we had four hours of “Challenge the Pro”, again at On Cue Billiards.  We called it the “I Should Have Been Chosen for the Mosconi Cup Challenge”.

For a donation, local players could challenge a team member to a game of 9 ball.  If they won, they received a nice Team USA T-shirt.  The turnout was huge and we raised $1800 for the designated charity.  There was tremendous goodwill in the local community for our charitable efforts.  The players behaved well, and were positive and engaged.

We believe that as a result of this visit, our players have a whole new appreciation for what it takes to be an elite player.  The Navy SEAL’s by their example, have given us a lesson in the real meaning of hard work and team work; and taught that proficiency in itself does not excuse bad behavior.

We want our team to strive to be new and improved role models for the sport, and to strive to train harder than ever.  They are more unified in this goal, which bodes very well for a good performance in December.

Our thanks go out to, Amir Pishdad, all the officers and enlisted men at Phil Bucklew Naval Training Center, Matchroom Sport, the ownership and employees at On Cue Billiards, and all the members of the local pool community who so enthusiastically supported the events of this very memorable weekend.