(Doha, Qatar)–When players and fans talk about the “pool gods,” they’re referring to that mysterious force that seems to regularly take over important matches, sometimes for no apparent reason. Often times, though, in hindsight, there are clear reasons for the gods’ actions; to stamp down over confidence, reward risk, or penalize players for missing shots that were meant as gifts. Anyone who’s watched or played enough pool swears the pool gods are real. These other worldly forces provide the ingredients for championship pool’s incredible nerve racking drama. 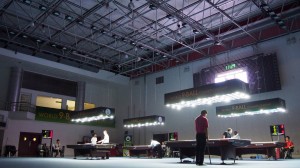 The pool gods certainly appeared to be hovering over the proceedings Wednesday inside the Al Arabi Sports Club in Doha, as the final 64 players did battle in a rollicking day long pool-fest in the first single elimination round of the 2013 World 9-ball Championship.

After the 11 hours of play, 32 players headed for the exits, while 32 stayed alive and will come back Thursday for a veritable sprint to the finish line that promises some incredibly exciting pool. By the end of play Thursday, the run for pool’s biggest prize will be down to just four players.

There was nothing anyone could call a major upset today, but the twists and turns provided a full day’s entertainment for the several hundred fans on hand. For many of the players, they looked like they had just emerged from full scale battle.

Taiwan’s Chang Jung Lin must surely being looking upstairs and asking lots of questions today. The world ranked number 8 came to Doha with heavy expectations and deservedly so as he is Taiwan’s number 1 player and is a proven winner of big events.

Down 4-2 in a race to 11 match against German veteran Oliver Ortmann in the day’s first of four sessions, Chang stormed in front 6-4 and looked to be marching towards victory. But suddenly, the towering Chang’s break shot completely abandoned him. Unable to find an opening after the break, or even pot a ball, Chang lost his confidence, while Ortmann, seizing on the moment, found his. The German won seven straight racks to send Chang packing. 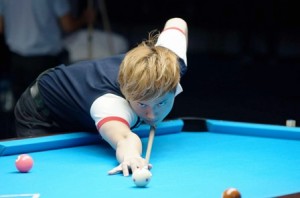 “It all depends on the break shot,” Ortmann said. “You have to hope your opponent breaks bad. That’s the only chance you have against a guy like him. I know how good he is. He’s one of the best in the world so to beat him gives me a lot of confidence.”

sWith his performance today, Chang’s stable mate Ko Pin Yi has certainly installed himself as one of the favorites to at least make it to the final four after tomorrow. Ko has been untouchable this week and continued his fine run today, easily beating Korea’s Ryu Seung Woo, 11 – 2.

The first session featured several showdowns between former world champions. 2001 World Champion Mika Immonen was down 3-1 to 2004 World Champion Alex Pagulayan. The Finn, however, turned up the heat and won 11-6. Immonen has been playing superb pool at the highest levels for the last six months and, as usual for Mika, confidence was in no short order.

China’s supremely talented Wu Chia Ching always provides a heavy dose of reality to anyone he plays. 2000 World 9-ball Champion Chao Fong Pang, however, didn’t seem too impressed early on. The veteran Chao led Wu through the first three quarters of their match. But Wu proved to be just too good and won down the stretch, 11-8.

Filipino fans had hoped their hero Efren “Bata” Reyes could conjure up the old magic just one more time. But the Netherlands Nick Van den Berg would have none of it as he handily defeated Reyes 11-5.

“I had an answer on almost every safety he played,” Van den Berg said. “For the rest i played solid and my break is getting better.”

Those pesky pool gods made their presence felt in the second session, just when Great Britain’s Karl Boyes thought he had a slot in the final 32 in his back pocket. Boyes had cruised to a 10-4 lead over the Philippines Marlon Villamor when, out of the blue, his break abandoned him. At the same time, Villamor started freewheeling and playing lights out pool, and tied the contest at 10-10.

Boyes was a bag full of nerves in the last rack and was faced with a safety on the 1-ball, or a difficult bank. The bank was one of those shots that if it goes wrong he loses, but if it goes right, he hits the jackpot with a win. Boyes chose to risk everything and nailed the bank and went on to run the table for a spot in the Final 32.

After the hell-ride of a match, Boyes was left shaking his head in disbelief, but also realizing how the higher powers play tricks with your mind.

“The gods just changed up on me,” the Brit said. “You feel like you’ve seen it all in this game and then something else happens. You can never fully understand 9-ball. One minute I’m in total control and he’s gone. The next minute I’m under pressure and shaking like a leaf and he’s looking great.

“I played so many safes against him and he kicked out and had me hooked. So I figured I’m not letting him back at the table. If I’m going to go out, I’m going to go home hitting the ball.” 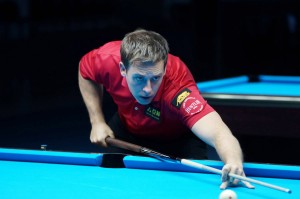 Just about the same time, the USA’s Corey Duel and Great Britain’s Daryl Peach, the 2007 World Champion, were doing battle on the precipice as they slowly ground their way to a 10-10 thriller. In the final rack, Peach got highly unlucky on one safe, only to play a brilliant out on the next shot that led to an open table and a massive sigh of relief when the final 9-ball dropped.

In other action in session two, the Philippines Lee Vann Corteza had to come from behind early to take out pesky Manuel Gama of Portugal, 11-7. Austria’s 20 year old Mario He ensured his best result ever in a world championship with an 11-7 win over Mark Gray of Great Britain. Greece’s Nick Ekonomopoulos finally had a solid match with a strong 11-8 win over China’s Wang Can.

The drama continued in the evening as the Philippines Dennis Orcollo and Taiwan’s Cheng Yu Hsuan engaged in an amazingly high quality and tense affair in front of several hundred partisan Filipino fans.

It looked dark days for Orcollo early on as he fell behind 7-2. But Orcollo knows that in pool, you sometimes have to just bide your time and wait for that mysterious momentum to turn. Indeed that chance came with the Filipino about to go 8-3 down when Cheng missed a 7-ball. From there, the pool gods swung the “mo” to the other side and Orcollo was soon up 8-7.  The pair then duked it out right to the bitter end and Orcollo pulled it out at the wire.

“At the beginning he got lucky and I had a few dry breaks,” Orcollo said. “But I just stayed calm and I just wait for my chance. When he missed the seven ball, I knew right there that that was my chance. Instead of 8-3, it’s now 7-4. Then the balls turned against him.”

Across the room, 2003 World Champion Thorsten Hohmann of Germany looked like he was dead in the water down 10-8 to Japan’s Toru Kuribayashi. But two late mistakes by the Japanese left the door open for Hohmann, and he stormed back for a heart pounding 11-10 win. 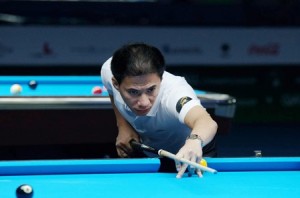 The Philippines continued to look exceptionally strong in the final session of the night. Carlo Biado got out to a quick start against German Hall of Famer Ralf Souquet and never looked back, winning 11-5. Come backing Marlon Manalo put lid on the hopes of Kuwait with a workmanlike win over 21 year Omar Al Shaheen. Veteran Ramil Gallego defeated Chile’s Enrique Rojas, 11-8.

Great Britain ended the day with five players remaining and Chris Melling looks to be one of the strongest at the moment. The 2011 China Open champion can be positively ferocious when he is on his game, and that looks to be the case this week. Melling played near perfect pool in an 11-7 win over Taiwan’s Chang Yu Lung.

“I played unbelievable,” said Melling, never shy of confidence. “I ran seven racks off my own break.
I think I’m playing better than when I won the China Open.”

Long time pool fans will certainly be cheering the progress of Italy’s Fabior Petroni, who has seemingly rolled back the clock this week. Petroni certainly looked fab with a fine 11-6 win over Switzerland’s Dmitri Jungo.

Thursday promises to be the events most exciting day as the field will be reduced from 32 players down to four. Look for the  pool gods  to be hanging around the Al Arabi throughout the day.

The semi-finals and finals will be played on Friday, September 13.

*The World Pool-Billiard Association(WPA)  will be on hand in Doha throughout the week bringing you all the drama from the 2013 World 9-ball Championship. WPA Press Officer Ted Lerner will be reporting from the Al Arabi Sports Club with daily articles containing insight, interviews and analysis, as well as photos. Ted will also be manning the WPA Facebook page and Twitter feed and responding to fans queries and comments. Fans can also follow all matches via the WPA live scoring platform.

*The 2013World 9-ball will be held in Doha, Qatar from September 2-13,2013 and is sanctioned by the World Pool & Billiard Association(WPA), the world governing body of the sport of pocket billiards. 128 players from across the globe will compete for the biggest prize in Men’s Pool. The 2013  World 9-ball Championship is a WPA ranking event.