The World Professional Billiard League located in Las Vegas, NV is now in the fourth week of its inaugural season.  Each week, the WPBL looks to add new features enhancing the overall experience for both fans and players alike.

In recent matches fans may have noticed the inclusion of three more cameras and the use of a new lighting sequence.  Incorporated in these additions, was the “pocket cam” which not only gives a unique view of the process of pocketing or missing a ball, but ultimately making enthusiasts feel like they are part of the action.

The WPBL’s live broadcast is now running with one of the world’s most universally supported streams available on the internet.  The stream has been tested and is fully capable of supporting the increasing amount of traffic to the www.wpbltv.com website. 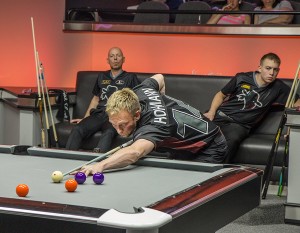 A preview of this weekend’s match-ups will see all six teams in the North Division competing against each other.  There will be no matches on Thursday June 20th as a result, the first match of the week will be Friday June 21st at 6:00pm PT.   Friday’s match will feature the Toronto Blue Sharks who are currently in 4th place overall versus the Minnesota Outlaws who are close behind in 5th. Players to watch include: Thorsten Hohmann, captain of the Outlaws who is coming off of his 60 point run, while the Blue Sharks Morra currently sits in 3rd place in the individual player standings.

Other key matches will include the play of the Chicago Rockets who currently sit unexpectedly in 11th place overall, although team member Mika Immonen is ranked 2nd in individual stats. First in the overall team standings, the Philadelphia Aces will take on the New York Pride who have recently struggled on the table.  Finally the Pittsburgh Poison will see action against the Pride and the Rockets as they try and increase their 9th place team standings.

Each of the matches will be broadcast to a live studio audience at the WPBL Arena and at WPBLtv.com.  For a complete listing of this weekend’s schedule visit the WPBL website.  The WPBL will continue to make frequent announcements.  Please continue to follow the WPBL for additional updates: