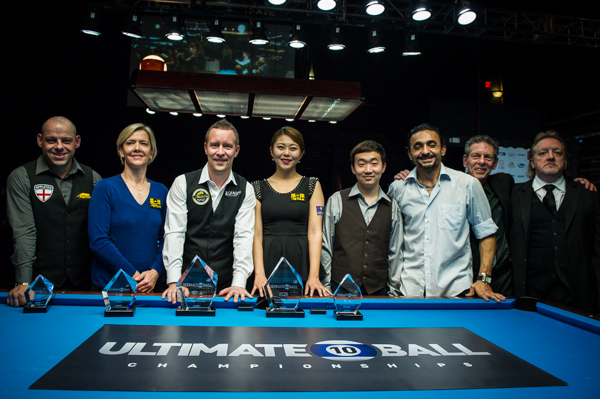 Ga-Young Kim had no easy road to the hot seat. This Princess of Precision had to face many very tough opponents to arrive there. Among the foes she vanquished were Siming Chen (7-3), Jasmin Ouschan (7-4), Line Kjoersvik (7-2) and Allison Fisher (7-2). She appeared to get stronger with each succeeding match.

Ga-Young would face Allison again in the finals. After her loss to Ga-Young for the hot seat Ms. Fisher had to take on Line Kjoersvik to get that rematch. Fisher barely slid by Kjoersvik 7-6 and then had to enter the final arena with the memory of the recent trouncing in her mind.

Neither player began comfortably in the early innings. But by the third rack both had settled down into their rhythms. Ga-Young found the pace first and won the first three racks. But Fisher has been here before and fought back and after 8 racks the match was tied at four games apiece in the race to 9 games. 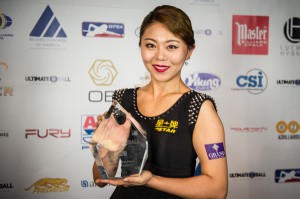 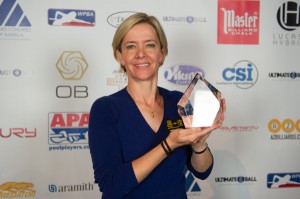 But then Ga-Young caught a higher gear and won the next three racks to take a 7-4 lead. A couple of racks were traded but in rack 14 with the score at 8-5 Ga-Young wound up aiming at the case 10 ball, a fairly routine cut into the corner. Just as she pulled the trigger a fan focused a camera phone on her and the infra-red depth-finder on the camera sent a sudden shot of red light into Kim’s eyes when it was too late to stop the stroke. The 10 ball bobbled the jaws and hung there. Fisher took the shot and the rack.

Kim wouldn’t be denied and won the final rack, however, to take the title of Ladies 2013 Ultimate 10-Ball Champion.

Strangely, a very similar chain of events unfolded in the men’s event as well. Our two finalists came form opposite ends of the winners bracket to meet in the hot seat match and the loser came back for a rematch in the finals. Our cast for this drama included Mika Immonen who went through the winners round unscathed and Wang Can who was doing the same until he ran into Immonen in that penultimate winners side challenge. But Wang did not leave that match with a heavy heart. He kept it close throughout and only lost 10-8. He then vanquished Darren Appleton 10-7 to win his rematch. Wang Can had never held a major title before but everyone knew it would not be long before the young man from China stood on this type of doorstep. 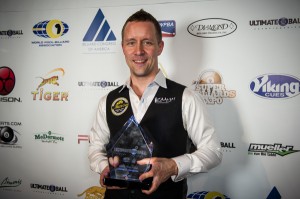 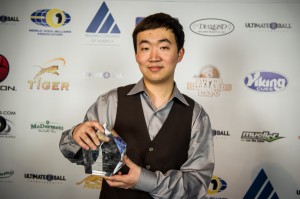 Can had done some serious damage on his way to the finals. He steamrolled Raj Hundal 10-4 and then gave similar treatment to Jayson Shaw of the UK 10-6. He took out young sharpshooter Justin Bergman 10-4 and then treated none other than Shane Van Boening like an unwanted stepchild by embarrassing him 10-2. His next victim was Alex Pagulayan and Pagulayan wilted 10-4 under the heat. It was then he met his first loss loss from Immonen.

Immonen had been in form all week long. He bested Ernesto Dominguez (10-2) and then put away Nikos Ekonomopoulos (10-6) and Mike Dechaine (10-4). Next to face the chill of the ice was Darren Appleton. Appleton had been having a fine run of his own but Mika just proved too strong and beat him 10-7. It was in the next round that he sent Wang Can left and took his chair to wait for the finals.

Mika drew first blood there. But this final was a race to 12 and Can was determined not to let Immonen get too much momentum.  Can took the second rack to tie us early. A true contrast of style, Can plays with a quick pace while the Iceman is much more deliberate and thoughtful. Youth against experience. Experience took the next rack but youth fought back to tie us once again.

Rack five went to Immonen, Can tried to jump out of a safe early in rack six that failed miserably. MIka had an easy shot on then but there was trouble everywhere on the tables with clusters abounding, Immonen wisely played safe on the two and eased the major trouble apart at the same time. That gave him ball in hand when Can could not make contact. Immonen ran out the rack and Can seemed to tighten in his chair. Immonen opened the next rack as pretty as a rose. Two balls found gravity and the one awaited him in the corner. Immonen cleared the table easily and owned a three-game lead at 5-2.

The alternating break format brought Can to the table for the next break. If his arm had grown cold in the chair it did not evidence itself as he calmly broke and ran the table. 5-3. Immonen broke the next rack and again received an early ball in hand off of a great safety. And again he used it to run the rack and lead again by three racks at 6-3. Can again broke and ran to get us to 6-4 but knew that at some point he would need to break Immonen’s serve in order to really threaten. When Immonen unintentionally made a ball during a safety attempt he left the table to Wang and Wang fired a very long 3-9 combination into the corner. That must have taken all of his focus because he missed the next routine shot to hand control back to Immonen. That was all Mika needed to claim the rack and lead 7-4.

Can kept the balance of the game as he took the next rack. Immonen was hardly enjoying a comfortable lead. He was maintaining the 2-3 game lead but those can evaporate quickly. After Mika took us to 8-5 Can lost his cue ball behind the rack on the break shot and stared at a 1 ball that was 9 feet away. He trued to make the shot, missed, but rolled into a safety out of which Immonen had to kick. Can got control of the table and ran down to an easy shot on the nine. He made it but carelessly scratched on the shot and Mika accepted the gift to lead 9-5. His next break and run made it 10-5 and the train was leaving the station with Can on the platform. When Mika took the next game he owned the hill and the break.

And he broke it so well. The table was at his mercy and Mika showed none. He ran those balls easily and claimed the crown of Men’s Ultimate 10-Ball Champion for 2013.

Thanks must go out to the entire staff of this event. Ken Shuman and crew ran the event without a hitch. And the organizers wish to once again give thanks to the companies who joined their names to this event and helped make it a success. Iwan Simonis Cloth, Predator Cues, Aramith Balls, Diamond Tables, Master Chalk, Lucasi Hybrid Cues, Tiger Products, Poison Cues, OB Cues, The Super Billiards Expo, Viking Cues, CSI, Seyberts Sporting Goods, McDermott Cues, Fury Cues, the APA, and Mueller Sporting Goods all receive a tip of the hat. 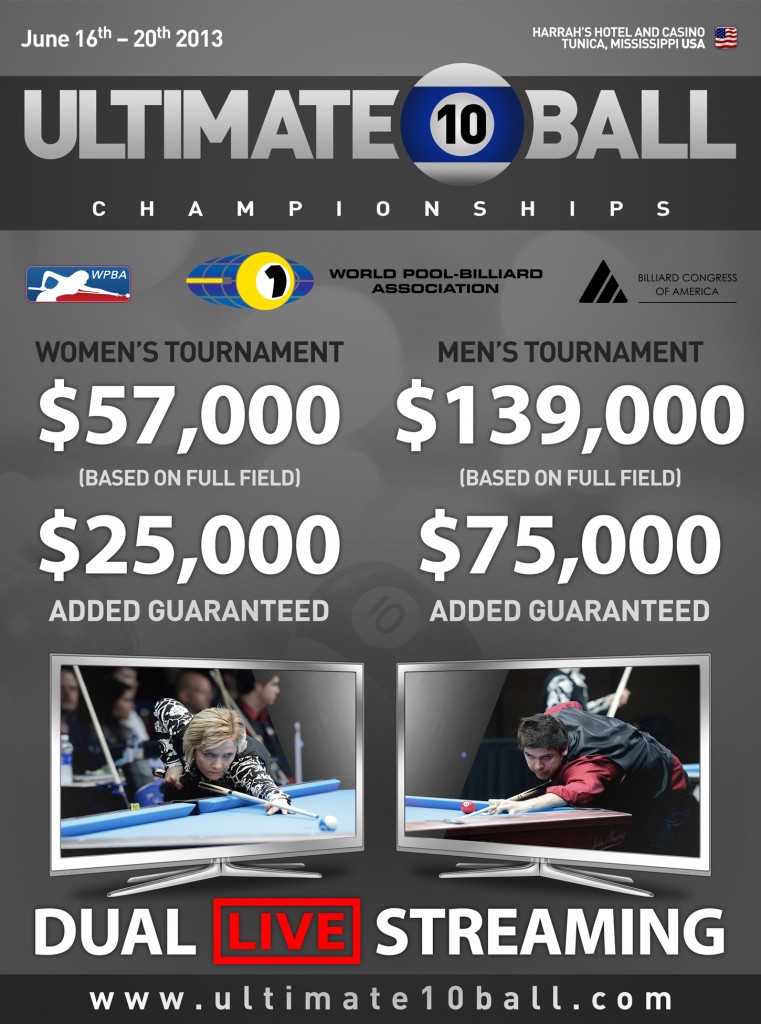