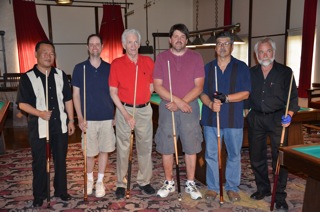 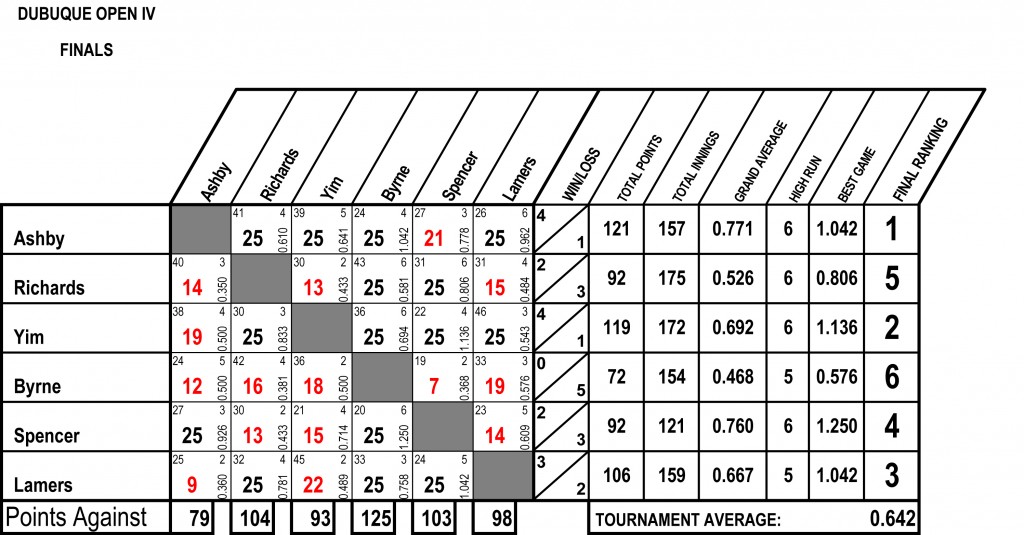 Defending champion and former national champion George Ashby managed to repeat as the winner of the fourth Dubuque Open Three-Cushion Tournament.  The event concluded Sunday night in the billiard room of the Masonic temple at 12th and Locust.

Ashby, of Murrayville, Illinois, got a stiff challenge from Kyung Yim, a strong Korean player from Denver, in the final game, but prevailed at the end with a series of spectacular, pressure-packed shots coupled with tight defense.  He took home the first prize of $700.

Yim was second and Fred Lamers, representing the Minneapolis Billiard Club and winner of the first two editions of the Dubuque Open, was third.  The surprise fourth-place finisher was Eric Spencer of the Illinois Billiard Club, whose unorthodox style was enough to give Ashby his only defeat.  Spencer also won the best-game prize for scoring 25 points in only 20 innings.

The field was limited to 18 players and featured entrants eight different states, including Yim of Colorado and Ray Piworunas of Sicorro, New Mexico.

Action took place on three reconditioned Brunswick pocketless tables that date from the building’s opening in 1932.  Billiard tables are larger than pool tables and three-cushion played with only three balls.  Points are scored by making the cueball contact both object balls with various restrictions.