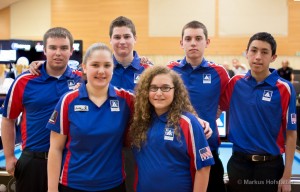 Iowa’s Chad Behnke remains undefeated and is poised to bring home a medal. Behnke has been working hard with coach/mentor Joe Villalpando in hopes of capturing this coveted title. Former World Junior silver-medalist Briana Miller escaped a close first round match against Katerina Polovinchuk of the Ukraine before losing her second match to Kamila Khodjaeva of Belgium. Miller hopes to bring home another medal this year.

Wildcard Manny Perez of Kansas City displays some serious heart. Perez, who was a last minute invite after Zachary Hampton was unable to attend, took a first round loss while suffering from a bout of the flu. The 14-year-old bounced back in round two, defeating Korea’s Sa-Ung Kim with a score of 9-7 after starting the match down 4-0.

Kayla Roloson is the final Canadian standing. She had a slow start in round one, taking a 7-0 loss against Sylwia Zabek from Poland. Roloson did not give up in round two, eliminating Anika Malan of Russia. The 15-year-old Roloson will face Keerath Bhandaal of India next.

With nearly half the field whittled down, play resumes at 9a.m. alongside the wheelchair championships.

Follow the progress of this event and our North American representatives at the following links:

The BEF website will also have the latest updates on our North American players: www.billiardeducation.org