This special event of the Dr. Cue Classic Artistic Pool “Sport & Show” Tour showcased some of the greatest Artistic Pool players under the WPA / APTSA sport umbrella. In addition, top players from several league tour stops held in 2012 at respective National and / or International events of the BCAPL, VNEA, ACS, and APA, plus several “at large” entries participated.  All event activities were done in conjunction with the APA Indiana State Invitational tournament with over 1100 APA players in attendance, along with a huge fan base watching in amazement at all that was going on.

Competitors played side by side in special 3 / 4 person – player groupings with 7-foot Diamond tables and high percentage make rate shots creating an equalizer effect for all participants.  Over $10,000 in guaranteed payout values and a rather large player / audience prize fund produced player and fan friendly opportunities in a reunion style billiard atmosphere.

In addition to the Cup VI event, the 1st ever Q & Cue Characters “Roll To Victory” Challenge took place with over 261 preliminary and / or “buy back” entries participating in this simple, and yet very unique “pool ball rolling” challenge – done without the aid of a cue stick.  On Saturday night the magnetic finals took place for those that had qualified from the initial rounds, as 4 top finalists earned a share of the $1000 guaranteed prize fund.  James Hess from Marion, IN displayed great focus and a steady hand on his way to becoming the event champ, while winning $400 for 1st place.

Note:  An added feature for this special challenge included raffle drawings for players entering the competition.  Scott Smithhart (Evansville, IN) won a custom “Table Trotter” cue / case ($600 value) donated by McDermott Cue, and Greg Fox (Bloomington, IN) won a Dr. Popper jump cue valued at $125 donated by Mark “Dr. Popper” Dimick.  Dozens of APA t-shirts were awarded to finalists out of the money, via raffle ticket drawings, and thru exciting “parade moments” with audience members.

A special feature accented the 3 days of festivities when a unique presentation was made to Charles “Spitball Charlie” Darling from Washington, MO as the 2012 Cue-Dean-“E” IV Honoree.  A large group of sport fans and fellow players witnessed the emotional moment, as “Charlie” was presented with a beautiful McDermott “Table Trotter” cue / case, plus a custom Cue-Dean-“E” IV plaque.  These awards were given to signify his “E”ntertainment, “E”ducation, and “E”nergetic talents, plus his “E”nlightening “spirit gift” to the magnetic world of “artistic pool” and beyond. 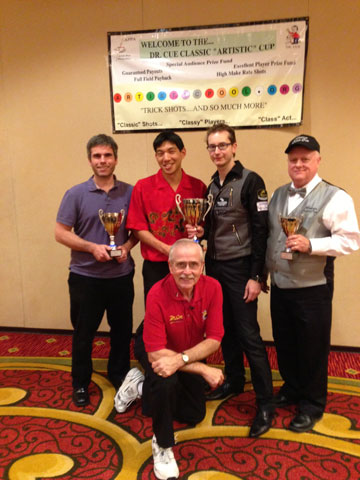 Note: Points listed are for 40 shots / challenges attempted by each player. Event tiebreaker rules were used to break same scores and are shown in score postings above by number of 1st attempts after “dash” line. 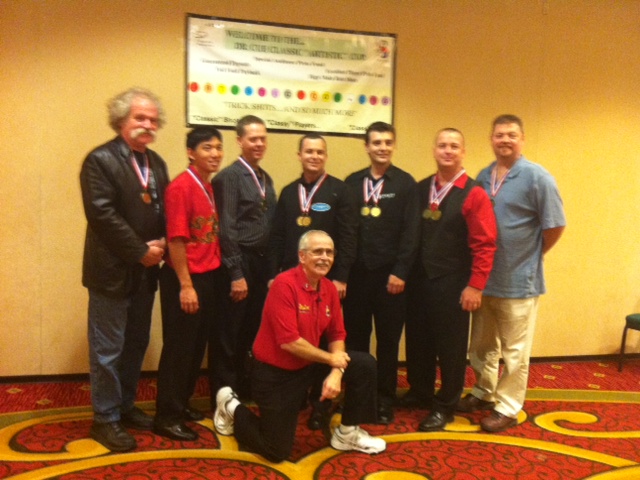 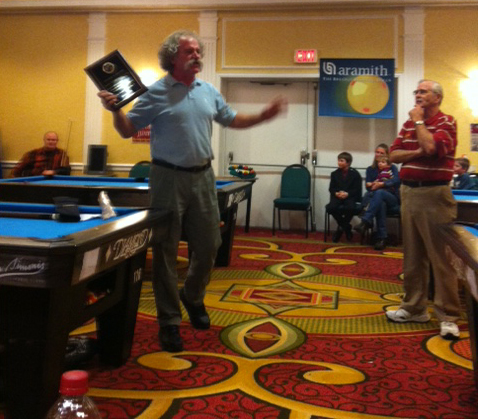 Charles “Spitball Charlie” Darling was presented a custom plaque award on Saturday night (12/1/12) as the Cue-Dean-“E” IV International Honoree. He was also awarded a custom Dr. Cue “Table Trotter” cue / case donated by McDermott Cue.  A spirit filled presentation was done in honor of David “Dean” Edwards (1950 – 2006), Dr. Cue’s best friend. Dr. Cue, Ms. Cue, and a large group of players / fans expressed a heartfelt appreciation to “Charlie” for his Entertainment, Education, and Energetic “table-trotter” style talents and Enlightening spirit gift to artistic pool and beyond.  “Spitball Charlie” now becomes part of an exclusive group of past Cue-Dean-“E” Honorees – Jason “The Michigan Kid” Lynch for 2009, Rick “The Barber” Hawkinson for 2010, and Jason “The Tiger” Kane for 2011.

Special Note: As creators of this unique challenge, Professor – Q – Ball (Paul Frankel) and Dr. Cue Promotions (Tom and Marty Rossman) want to thank McDermott Cue and Mark “Dr. Popper” Dimick for their product / service sponsorship.  In addition, we want to thank everyone that participated in this magnetic attraction and making it a total success!!

Special Note:  Marty and I want to thank John Schoonveld, APA league operator and director of the APA Indiana State Invitational Tournament for providing the venue and logistical amenities for our 2012 special events.