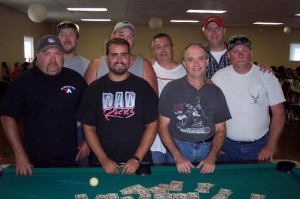 Two brackets totaling 32 teams shot it out for a prize fund of $7,000 from August 24 to 26th at the Cooperstown Vets in Derry Pa.. This Titleholder is typically the smallest one of the three yearly Titleholders due to the summer slow down but was purposely restricted even more so this year due to the national play offs scheduled into this already busy weekend. But there was still plenty of stiff competition and hill-hill matches.
Once again, the live video feed of matches from “The Coop” was a big hit. LH TAP was the first TAP league to live stream their Titleholders as well as the only league in Western Pa. streaming events. If you can’t attend a Titleholder, you can still be there by going to the U Stream link on the LH TAP web site or go to the many recorded matches that are saved on the LH TAP web site. At the June event we had family members viewing matches from as far away as Hawaii and this past weekend as far away as California. Now that’s a WOW factor!

The first bracket champs are 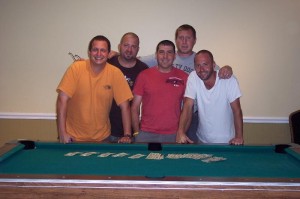 The 2nd bracket winners are

Teams that earned national play off spots for 2013 are

Five trips to TAP’s nationals in Charleston, S.C. were up for grabs last weekend with three trips being awarded to the Cambria/Bedford and Frostburg divisions and two to the Westmoreland county divisions. A combined total of 39 teams competed for those coveted spots in a single elimination format. This left no room for error and once the balls stopped rolling and the chalk dust settled the teams packing their bags are……