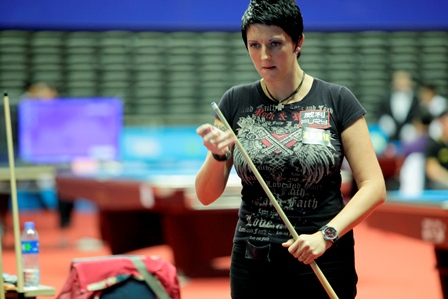 (Shanghai, China)–The 2012 China Open women’s event is now down to four players, and as befitting a tournament featuring the best in the world, the top three ranked players in the world will be part of the cast.

Great Britain’s Kelly Fisher,  world number three, is the lone non-Chinese player remaining, and life on the table here in Shanghai is not going to get any easier for the current World 9-ball Champion. Fisher will be take on world number one Fu Xiaofang in what promises to be a dramatic battle of two of the game’s best.

In the other semi-final, Chen Siming and Zhou Doudou, two of China’s finest younger talents will square off in a showdown of prodigious teenagers.

After struggling a bit yesterday, Fisher put in two quality performances today inside the cavernous Shanghai Pudong Yuanshen Stadium. She came back from 5-2 down to defeat Korea’s Ga Young Kim in the round of 16, 9-6. She then dominated China’s Chen Xue 9-4. Fu also looked tough and consistent as she first took down Gao Meng, 9-6. Fu then grinded out a 9-6 win over China’s Queen of 9-ball, Pan Xiaoting.

The match between Fisher and Fu is a rematch from their final in the World 9-ball Championship back in June in the north eastern Chinese city of Shenyang. In that match, Fu had started out like a house on fire, but she lost her composure after touching a ball with her shirt right she was about to take full control of the match. The foul was the key turning point in the match and Fisher soon caught up and took the lead, which she would not relinquish.

The world championship victory for Fisher was a major accomplishment for the Brit coming after years of near misses in China. Fu, on the other hand, seemed to wilt under the pressure of expectation and playing in front of millions watching on national TV.  Thus, tonight’s semi-final has a strong undercurrent of drama which is sure to affect the outcome.

19 year old Chen Siming will surely be favoured in the other semi-final, as she is considered by many to be the most prodigious talent in all of China.  17 year old Zhou, though, is where Chen was just two years ago; a rising talent looking to make her mark. Both players are members of China’s 8 woman national team, and this match is sure to offer several twists and turns before it ends.

Each semi-final is a race to 9, alternate break. The finals will be played on Sunday. The winner of the China Open Women’s event will receive $30,000.

The WPA will be providing live scoring of all matches up to the final on our website, www.wpapool.com.  There you can also get updated brackets and daily articles.

*The World Pool and Billiard Association(WPA) is the governing body of the sport of pocket billiards.The 2012 China Open is being sponsored by Star Tables, Andy Cloth, Fury, Holiday Inn Shanghai Pudong.