Efren Reyes in His First Predator World Tournament of 14.1

Efren Reyes in His First Predator World Tournament of 14.1 ! 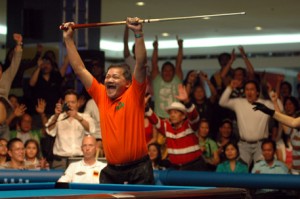 Queens, New York – Finally! The Magician will weave his magic for the very first time in a world competition for straight pool. 14.1 fans will be going crazy to see Efren showing his cue ball mastery in the ultimate game of patterns and control. Reyes can be seen at the Predator 72nd World Tournament starting on July 29th – August 3rd, 2012 at Carom Cafe in New York City. Fans and players alike can checkout www.Worldstraightpool.com for exclusive interviews with the pro stars, and all the latest and even archive news of the World Tournament. Dragon Promotions in conjunction with Dr. Michael Fedak is bringing the greatest straight pool players in the world to the greatest 14.1 event existing.

“Efren is a legendary talent and he represents a nation that has risen to the very top of the pool world. His presence at the tournament raises the temperature of the competition, the enthusiasm of the fans, and enhances its stature as a true world class tournament,” said Dr. Fedak, the World Tournament’s main benefactor.

Efren Reyes will be representing the Philippines during the event on which has had close calls, but no Filipino Champion yet. Dennis Orcullo got a Bronze in 2008 while Francisco Bustamante finished with a Silver in 2009. Can Efren be the one who finally clinches it for his country?

Philippines pro sports analyst Bob Guerrero of Yahoo! Sports Philippines says: “I read he made a century run in a 14.1 tournament years ago. He could do it again. Straight pool may not be his game, but for sure he can figure it out and go deep, just like Dennis Orcullo and Django Bustamante have done before at the World Tournament. 14.1 is the easiest game and the hardest game rolled into one. But one thing is sure, Efren is still a top 10 favorite to win. He’s so experienced that I’m certain he will be fine.” 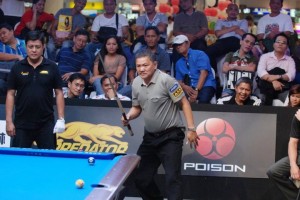 Japan’s top billiard site journalist Takao Takayama of www.onthehill.jp concurs:”Efren is an older player, so it is difficult for him to pot long distance shots. But in 14.1, with more balls on the table, he will play better. The math for Efren is this; 10-ball better than 9-ball, 8-ball better than 10-ball, and 14.1 better than 8ball. He won’t leave himself many difficult shots. So of course he has a chance. If he wins, I will not be surprised at all.” Japan will be having their national Japan 14.1 tournament this weekend and the top winner will likely attend the Predator World Tournament.

“It’s really exciting to have Efren playing in our World Tournament for the first time. Everyone we have spoken to about it so far have been absolutely ecstatic that they get to watch the greatest player alive performing the art of straight pool,” said Cindy Lee, CEO of Dragon Promotions. This is the seventh year in a row Dragon Promotions has produced the event in 14.1’s one hundred year history.

Tickets will be sold at the door during the event. Tickets for the Straight Pool Hall of Fame Banquet can be bought in advance online at www.worldstraightpool.com

The complete listing of this year’s roster of players will be on www.worldstraightpool.com soon, as well as quotes and tip from your favorite star players such as Johnny Archer, Thorsten Hohmann, Darren Appleton, Mika Immonen, John Schmidt, Efren Reyes, Allen Hopkins, Stephan Cohen, Charlie Williams and many, many more. The site also contains all the info on purchasing tickets for the event, The 14.1 Hall of Fame Banquet, and discounted hotel reservations at the Sheraton Hotel where the event takes place. During the event, daily updates will be added every few hours so fans can keep up with all the latest results and exciting stories. The site will also have the official brackets and tournament charts from the round robin through the end final single elimination charts.

Daily match times and complete tournament schedule will also be on the site.