The stunned defending high school champions, the South Garland Colonels, had watched in agony as their (27-25) match lead against the Yellowjackets in the final round of play slipped away to bring the match even (27-27) with only one game left to play.

The two best BETTER High School Billiard Program teams in the Dallas, Texas area were ready and set for action at AMF Richardson Lanes on May 22nd, 2012. The competitive game they played was 9-ball and they were playing a total of 55 games and were racing to 28 to win the coveted title of 2012 BEF Texas High School Billiard Finals champions. 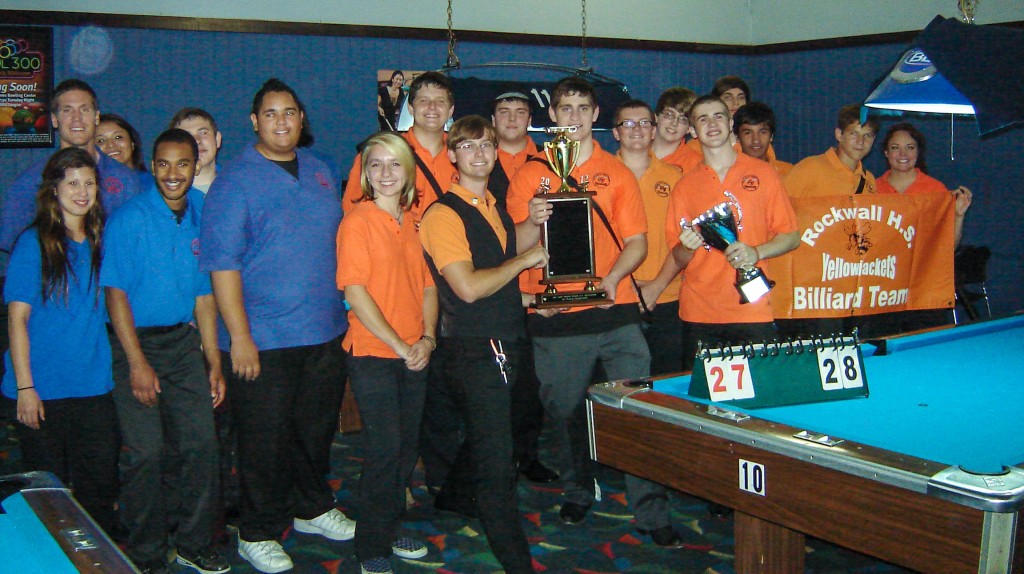 Both of these teams were no strangers to the finals as they both had faced off in last years 2011 BEF Texas High School Finals. In last years 2011 match-up, the Colonels easily swatted down the Yellowjackets (33-24) to win their first ever Texas high school championship title.

However, this year was different and the air was racked with nervous tension by both teams and spectators from the first to the last game of play in the 2012 Texas high school finals. In this match there would be no rout for the Colonels. It would come down to the last three games that would decide the match resulting in defeat or victory. On the Colonels coaches, parents, junior and senior veteran players minds was the score (27-25) and not this again.

The painful memory was still etched in the Colonels minds for those who played or witnessed the 2010 BEF Texas High School Finals against the Richardson ISD team in which the Colonels let their lead slip to be tied (27-27)… and then heartbreakingly lose (28-27) due to a rattled 9-ball in the corner pocket in the final game.

For the Rockwall H.S. Yellowjackets it was an uphill battle to win these last three games but they were up for the challenge as it could result in triumph at last for their school. So goes the saying “Never, never, never give up.” Standing in their way the Colonels were on the hill with only one more win needed to give them back to back championships a feat only the Rowlett H.S. Eagles have been able to accomplish in eleven years. The Colonels player, Aidan Sloan, would end up playing the last three games versus the Yellowjackets players in order i.e.; Justin McClosky, Kyle White, and then nationally ranked senior Cooper Stephens.

In the Sloan-McClosky matchup the table was cleared by both players and there was only the nine-ball left to be pocketed by Sloan to finish the Yellowjackets off but McClosky made a table length do-or-die shot on the nine denying Sloan the chance to end it bringing the score to (27-26).

Next up, Sloan would face the quiet Yellowjackets most improved player Kyle White. White a veteran player from last years match up with the Colonels had dramatically taken his game to a higher level and it paid off.  Capitalizing on a Sloan error White received  cue ball in hand and looked extremely poised as he methodically ran the last three balls out with the nine-ball also being pocketed on a tough table length shot which brought the match to a tie (27-27).

The Yellowjackets breathed out a sigh of relief as the Colonels were now holding theirs with nervous anticipation of the last game between Sloan and Stephens. For the Colonels it was that gnawing feeling of being here before.  It has taken eleven long years for the Yellowjackets to finally get this close with only one game left to feel the thrill of being the best high school billiard team in Texas.

The Rockwall High School billiards program over the last eleven years has had several top talented high school players to cue up for the Yellowjackets teams i.e.; Sean Duffey who ironically now coaches the South Garland Colonels, Scott Shipman, Tommy Ulbik, and Trey McMullen. All four number one players in the Dallas, Texas area went on to play at the junior national level.

Although the Yellowjackets teams have had more top individual players than any other of the fourteen Dallas area high school billiard programs that have participated since 2001 they still have not been able to win one championship for the Rockwall high school. 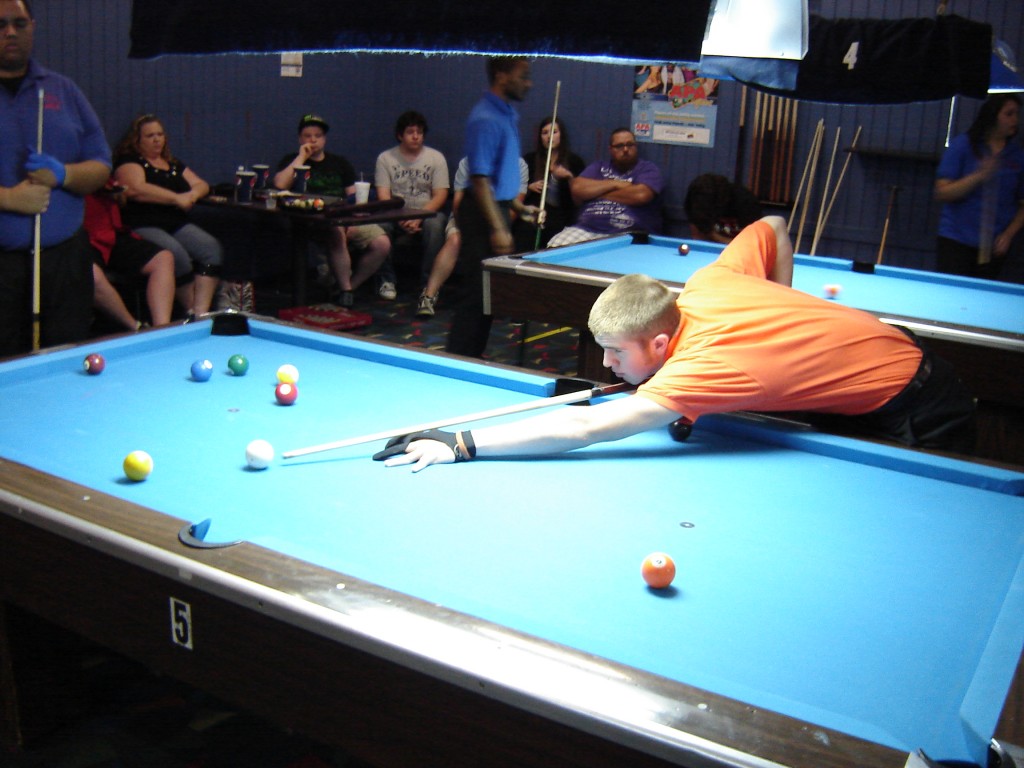 For the last and final game of the 2012 season the players Aidan Sloan and Cooper Stephens eagerly shook hands and proceeded to lag for the break. Stephens winning the break cracked the balls and the championship would now be decided by these two players. Balls were pocketed back and forth as they whittled down the rack until the last three balls the five, six, and nine were left on the table.

Stephens, faced with a bank on the five, opted instead to play safe which mistakenly resulted in a straight in shot for Sloan. For a few seconds it looked like the Colonels would finally put this match away. The five went down easily for Sloan but the six was now down table and had to squeeze past the nine to the corner pocket. Sloan stretched his neck and pre-set on this very crucial and long shot. He took his time with a few practice strokes and fired making a beautiful shot on the six only to have the cue ball come up short from the end rail leaving a bank shot to the side on the nine. At this point the entire room was staring at the table wondering can he make it.

Sloan tried his best on the nine but it came short of the side pocket rolling the nine back to the opposite side inches from the side pocket with the cue ball only a foot away. Everyone in the room knew it was over as Stephens patiently waited until he was absolutely ready and got down and tapped the nine in resulting in half the room cheering.

Congratulations go to the South Garland H.S. Colonels for their performance and to the 2012 BEF Texas State High School Billiard Finals Champions the Rockwall H.S. Yellowjackets (28-27). 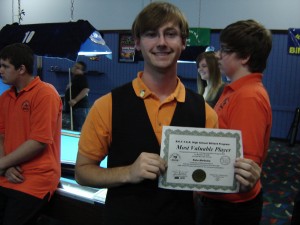 We would also like to acknowledge and congratulate Kole McGuire from Rockwall H.S. and Lesly Ibarra from South Garland H.S. for being selected by the BEF and awarded the 2012 college scholarships; Tessa Brown from Sachse H.S., Brian Emrick from South Garland H.S., and Cooper Stephens from Rockwall H.S. for qualifying for the 2012 BEF Junior Nationals and will be heading July 11th– 15th to Wisconsin to compete against the top junior talent in the U.S.

The program would like to thank the teachers and high schools for their dedication to their teams, Earl Munson and BETTER Play Billiards, Laura Smith and the Billiard Education Foundation, to the parents, and to all the students who competed this year.

For more information on junior programs please visit the BEF at www.billiardeducation.org.