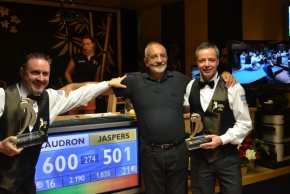 For more information and videos go to http://www.kozoom.com

MARXUQUERA – FrÃ©dÃ©ric Caudron was already the number one in the world ranking, after the Juanjo Trilles Challenge he is now the undisputed best player in the world. The Belgian today, on the final day of the battle in Marxuquera (Spain) on a golden clowd: he defeated the reigning world champion, 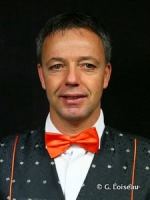 The fair judgment was flattering for the winner and hard for the loser. FrÃ©dÃ©ric Caudron prevailed in the Challenge from the very first match: after eleven innings in the first session Dick Jaspers led 19-10, then the Belgian launched his first attack and in all the other sessions he was unstoppable for his opponent.

He was the strongest in nine out of ten sessions, his best was the seventh, in which he made 34 points in four innings and 51 in seven (average 4.426 in that session).

The highlights in the Challenge were the seventh session with Caudron’s high average, the 21 Jaspes ran in the same round and the tremendous solutions the two players showed the audience. Furthermore, Caudron excelled mainly by his regularity, almost all the sessions playing over two average with peaks to 4.426 and 3.157.

The world of three-cushion has watched a demonstration of gifted talent, technique, speed and virtuosity, with which he kept Dick Jaspers, in his better days a world class player as well, a way behind. The battle had everything to grow to big heights: the best table, the perfect conditions, a wonderful audience, many viewers who have followed the match on Kozoom.

The expectations were extremely high, the match was only lacking the tension in the endrush. FrÃ©dÃ©ric Caudron was simply too strong in his marvellous performance. In fact he has never been threatened the ten sessions of sixty caroms.

He ran to a bigger gap, actually, in every session: after one day to 32 points difference, after two days to 58, after three days to 101 and after the final match to 101 again.

Can we condemn the format of this battle at the end (ten sessions, sixty caroms)?

Xavier Carrer, Kozoom director (CEO) and together with Juanjo Trilles the initiator of this match, said on the eve before the closing day: ,,The Challenge has been created to determine the best player in the world, we didn’t intend to give the audience a thrilling match with tension until the end. I do not think we might have said, with a 600-590 score, how exciting the match would have been, that the winner is the best player in the world. But now, with this score, there is no doubt: FrÃ©dÃ©ric Caudron is the best for the moment.”

The winner himself said: ,,It’s so subjective, I can’t come to that conclusion. This match I was better than Jaspers, but that doesn’t mean I’m the best in the world. May be in a month there will be another, there are so many top players.”

Dick Jaspers showed his admiration for Caudron after the match. ,,FrÃ©dÃ©ric is the winner with hundred points ahead, that means that he deserves it. I myself have done what I could, although I lacked a little luck, even in such a long race. But looking back, I think I’ve only made one lucky shot and maybe I missed sixty caroms on a millimeter.” That’s not an excuse, because I must admit: FrÃ©dÃ©ric was unbeatable.”

The title and record list of the Belgian allround player, who won only one individual world titel in his career so far (in Bogota, Colombia 1998) and one with the Belgian team (Eddy Merckx) in Viersen, could be misleading. Which player in the world would be able to win all titles in the Belgian championship multi-disciplines with six disciplines like FrÃ©dÃ©ric Caudron has done?

Dick Jaspers once was a master in all disciplines as well. He has made choices and now is only playing three cushion, occasionally interspersed with on cushion.

There could be one reason: maybe the Belgian lost spoiled some titles, because sometimes he is a slow starter, as we have seen in the Juanjo Trilles challenge, in which he needed in a few sessions five to ten innings to find his rhythm. That’s why he was often eliminated in an early phase of big tournaments, but in a match like here, in the Trilles challenge, he showed that he is the undisputed best in a marathon like this.

And actually, the Belgian is a multi-winner everywhere he performs. Take this year on the international stage: he won the world title with Eddy Merckx in the championship for teams in Viersen, won the European cup and the French team title with Agipi and the Spanish championship was the team of Gandia Cafemax.

The gold rush in the Juanjo Trilles Challenge (how appropriate in the golden house of the organizer) has enriched his title list with a historic victory.

,, I have lived for four days on a golden cloud”, he said after he was rewarded with the 10.000 euro bonus at the ceremony.