CHAMPIONS BREAK FOR THE FINISH LINE

(Shenyang, China)–With plenty of high drama and jangling nerves coursing through the beautiful Richgate Shopping Center in Shenyang, China, the 2012 Women’s World 9-ball championship has come down to the final four. And if credentials are anything to go by, fans can expect train loads of fireworks in the race to the wire on Thursday.

Fu Xiaofang, who won this event in 2010 and has been China’s and one of the world’s top players for the last two years, will take on Taiwan’s solid and capable Tsai Pei Chen in the first semi-final on Thursday. 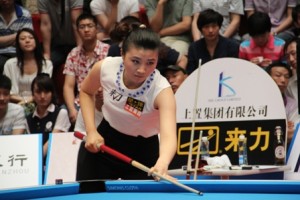 Then in the second semi-final, the 2009 World 9-ball Champion Liu Shasha will face off with the current WPA World 10 Ball Champion, Great Britain’s Kelly Fisher, who is playing white hot pool at the moment.
Chinese pool fans are no doubt hoping that both Fu and Liu will match up for the crown, and it would indeed be a fascinating storyline to see the two former champions face each other for the gold.  But Tsai and Fisher present extremely formidable obstacles  and, if their play today was any indication, both have every intention of thwarting the locals dream final.

The 24 year old Fu certainly looked the goods when the day started in the round of 16 today, as she delivered a 9-1 beat down to Taiwan’s former world 9-ball champion, Lin Yuan Chun.

Fu then headed for a quarterfinal showdown with world number 1 Chen Siming, who had just issued a warning of her own as she blanked Japan’s Chichiro Kawahara 9-0.  Chen’s prodigious talent often leaves onlookers in awe and after wiping the floor with Kawahara, the matchup with Fu screamed “Marquee.”

Playing on the TV table, Fu quickly put Chen on the back foot, playing marvelous safeties and controlling the cue ball with ease.  Chen couldn’t get settled and the steadier Fu shot out to a  5-0 advantage.   Chen woke up and got it to 5-3 on the back of some poor shots by Fu. But then the wheels slowly fell off for both players. The balls, however, seemed to favor Fu as she was rarely penalized for clear mistakes.  Fu had it to 8-4 when Chen decided on one more effort and the youngster cut the lead to 8-7 and had the break.  But a dry break in rack 16 was all Fu needed and the former champion put the high profile match away.

Tsai was next up on the TV table in a match against Chinese national team member Yu Han.  Yu had reached the semi-finals last year in Shenyang and was playing solid pool throughout the week. But so was Tsai, who had reached the quarterfinals by winning an all-Taiwan  matchup against the country’s number one player and current and two time Amway Cup champion Chou Chieh Yu.

Tsai never trailed in the match but neither could she put much distance between her and Yu. With the match tied at 5 all, the gravity of the moment caught up with both players and simple mistakes started to rear their ugly heads. But Tsai came through in the end when it counted, and won 9-7. 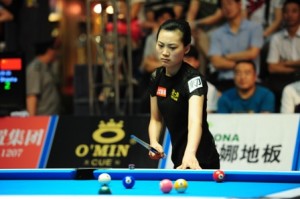 The next match between Korea’s Park Eunji and former champion Liu had every twist and turn imaginable.  Although she hasn’t won any high profile tournaments, Park is clearly one of the rising stars in women’s pool. She plays the game with a quiet panache, confident and cool. She also has moments when the wheels fall off but then she suddenly finds a way out of the morass.

It nearly happened just like that in her match with the 19 year old Liu. Park led from the start and pushed the score line to 6-2. Liu looked completely deflated and was ready to call it a night when, out of the blue, Park missed an easy 8-ball with a five rack lead in her grasp.

Faster than you can say, “turning point”, Liu caught a gear and thirty minutes later the former champion was leading 8-6. Park broke and ran to make it 8-7. The 16th rack had the crowd in fits as both players missed with just two balls on the table. A fortunate pot on the 7 ball sealed the match and much relief for Liu.

‘I didn’t think I could win,” Liu said afterward.  “I think I had a better mind when she missed that 8-ball in the seventh rack. Maybe God helped me. I’m just happy to win.”

Liu  said the pressure of winning a second world title is way more intense than the first time around.

Liu also knows she’s going to have to up her game in the semi-finals. That’s because she’s facing arguably the hottest player in the tournament in Kelly Fisher.

Great Britain’s Kelly Fisher
After her spectacular escape over Ga Young Kim the day before, Fisher  grinded out a solid win against the USA’s Monica Webb in the round of 16 earlier, winning 9-7.  In the last quarterfinal of the night, Fisher faced Taiwan’s Tan Ho Yun. Tan had reached this stage when earlier  she beat  Hall of Famer Allison Fisher in a nail biter, 9-8.

Fisher  came roaring out of the gates and never looked back. Breaking perfect, potting with dead eyed accuracy and playing with a confidence that oozed a clear desire for greatness, Fisher put on a show for the ages, completely obliterating the Taiwanese 9-0 in a match that took no more than 45 minutes.

With plenty of playing and traveling experience under her belt, Fisher feels that this could be her moment to shine. If she wins it all on Thursday, she could be the first to ever hold the World 9-ball and World 10-ball crowns at the same time.

“I’ve been playing and traveling a lot. For the last few years, I felt that I’m ready. In the last year my game has really improved.”

The WPA will be providing full coverage of the semi-finals and finals from the 2012 Women’s World 9-ball Championship in Shenyang on our website, www.wpapool.com. There you can get all the latest updates with live scoring of all matches, articles offering insights and analysis, updated brackets and photos. Fans around the world can also follow the tournament via the WPA Twitter feed, @poolwpa.