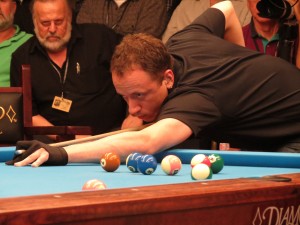 Gray showed a lot of poise in his earlier matches and this would be the same going into the finals. The first game would be fast as Gray took it down in one and half innings 3 to 8 after Shane made a miss-stake on his second shot. The second game would be different with Shane tying up the match in six and half innings, 8 to 0. Game three started off fast with Shane getting 1 ball in his first shot then Gray getting 4 balls in his second shot and Shane getting 5 balls in his third shot making the game score 6 to 4 Shane.  Then the safety battle started making the game go eleven innings with Shane taking it 8 to 5 and going on the Hill. Game four started slow with both players owing balls after three innings. This looked like it was going to be a duck and move game. Gray made a ball in the fifth inning to get even but neither Gray or Shane scored in the sixth inning. But the top of the seventh inning Shane opened up the table with some nice combinations to take down the game with a 9 ball run, 8 to 0, and the match 3 to1.

This makes Shane Van Boening the back to back One Pocket Champion having won it in 2011.  This win with his second place showing in 9-Ball Banks gives Shane a big lead in the All-Around Championship which he also won in 2011.