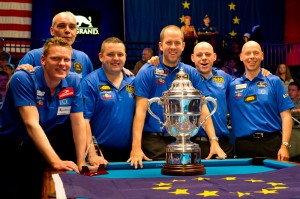 EUROPE has successfully defended the PartyPoker.net Mosconi Cup following a convincing 11-7 victory over the USA at the MGM Grand in Las Vegas. It was Holland’s Niels Feijen, in his seventh Mosconi Cup, who downed the winning 9 ball which sparked mayhem as his team mates flooded the arena.

It also delivered Feijen the Most Valuable Player award, achieved for two singles and two doubles wins: “It got a bit shaky but they went in,” he said of his 6-3 victory over Rodney Morris to seal the Mosconi Cup.

“I just want to thank the crowd, the British and Europeans and you need them to make it. There were some immense moments and thanks to the coach for doing a super job. He gave us speeches every morning and kept us sharp.”

The Americans, who had trailed 10-5 at the start of the day, won the opening two games to leave the Europeans looking a little edgy.
“Even this morning, there was pressure on us and we knew they would come out strongly. There was some heat to get over the finish line but these guys are just so good,” continued Feijen.
“Being the Most Valuable Player is something I’ve been dreaming about this for seven years, every year I’ve played in it.”
Johnny Archer, playing in his 15th Mosconi Cup was stoical in defeat; “We lost a couple of matches we should’ve won and they blitzed us in a few matches. We all gave it our best and will do it again next time. Hats off to their team, they hung in there when things didn’t look good.”
The opening match of the day saw Shane Van Boening put in an excellent performance to keep US hopes alive as he comfortably beat Nick Van den Berg 6-2. The South Dakota Kid kept his team in the competition on Saturday night when he beat the same opponent in a close match but this time he pulled away from 2-2 to take the victory.

The Scorpion took the opening two racks before he missed a 4 ball in the third to give Appleton a great opportunity which he accepted to take his first rack of the night. However, a loose safety gave Archer the opportunity in the next which he converted to move into a 3-1 lead. That soon became 4-1 as the 4 ball kicked the 9 ball into the centre pocket for the second golden break of the tournament.

A poor break shot from Appleton gave Archer every chance in the sixth game but he missed a bank shot on the 5 ball and Appleton made it 2-4.

He took the seventh but Appleton missed a cut on the 2 ball in the next though and Archer held his nerve to reach the hill. He completed a break and run to seal the victory and reduce the deficit to three.

It was left to Niels Feijen to bring home the bacon for Team Europe as he faced off against Rodney Morris. The Hawaiian had not been at his best this week but had showed flashes of his best form at times.

A poor safety from Morris gave Feijen an opportunity in the opener but he scratched, drawing the ball down table and into the centre pocket and Morris, with ball in hand, ran out. Feijen took the next with a tidy run out and went into a 2-1 lead when Morris scratched on the break and handed him an open table.

Another excellent run out, this time from Morris, levelled the scores at 2-2, before Feijen took the lead, thumping a tricky 9 ball into to the top corner pocket. He increased that lead as he was given ball in hand after a Morris foul and Europe were two racks away from glory.

That became one rack as Feijen took the next before a dry break from the Dutchman gave Morris a chance in what was a high quality match, and the Hawaiian ran through the table to reduce arrears to 5-3.

Morris broke in the next and with the table open, he missed a horrible pot on the 2 ball. Feijen though, with nerves creeping in, missed it himself. Finally a shocking safety from Morris on the 5 ball was to prove to be the Americans last contribution to the event as Feijen ran out for a glorious victory.

Notes: Matchroom Sport are one of the world’s leading producers of televised sport and are responsible for over 1,100 hours of original programming across a range of sports. Based in the UK and chaired by charismatic founder Barry Hearn, the Mosconi Cup is one of a stable of pool events that include the World Cup of Pool and the World Pool Masters.

Mosconi Cup tables are supplied by Diamond Billiard Products, the cloth is by Simonis, balls are provided by Aramith and the Official Cue is Predator.