Europe one away from glory Europe 10- 5 USA

Europe one away from glory

TEAM EUROPE is now one match away from retaining the PartyPoker.net Mosconi Cup after a one-sided blitz on the American team in front of a standing room only crowd at the MGM Grand, Las Vegas.

After getting the better of things yesterday, the Americans entered the day with high hopes but were battered from start to finish with only Shane Van Boening contributing some red to the score board.

Needing a great start to the day, the USA lost an exciting opener as Appleton and Feijen got the better of Dechaine and Putnam by 6-3. That restored the Europeans three point lead that they held at the start of day one, but the final rack of the match was one of the best safety battles in Mosconi history as all four players took turns to leave the cue ball tucked up.

It was Feijen who broke the deadlock as he made a table length bank on the blue 2 and from there the Europeans ran out to take the match.

“Yesterday we lost the first doubles match 6-5 but Niels and Nick had played well. You need a bit of luck at the right time and we had a couple of rolls there,” said Appleton.
“But we played well at the end and had a lot of fire inside us – Niels is a fantastic player to play with,” he added.
There was more misery for Putnam in the next as he was easily beaten by a fired-up Darren Appleton as Europe moved into an 8-4 lead. The tone was set in the opening rack as Putnam looked to be heading for a run out but missed a howler of a 9 ball to hand the rack to Europe. The big man never really recovered from that and further errors sealed his fate.

The third match featured Johnny Archer and Rodney Morris against Niels Feijen and Ralf Souquet and for the American side it was desperate stuff. 8-4 soon became 9-4 as the lacklustre American pair failed to make any sort of dent in the confident Europeans’ armour.

“When we had a training camp we played with each other and figured out what teams were working out and Johan then picked the pairings,” said Souquet.
“It’s not over until the fat lady sings and we want to win the next two and finish it off. We have quite a comfortable lead but it’s still a long road.”
Feijen added “When everyone is scoring points in front of you it takes the pressure off. We’ve clicked really well and have a great team spirit and a great team.” 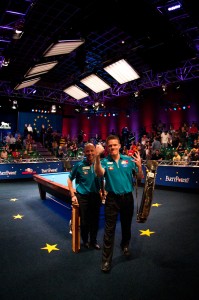 It was Shane Van Boening who finally stopped the rot and ensured a final day of play as he endured a torrid match against Nick Van den Berg that went all the way to a decider. Van Boening had led 5-2 at one stage but the plucky Dutchman fought back to level it at 5-5 and breaking in the final rack he found himself favourite.

A dry break got the American back to the table and he played a superb slow roll on the 1 ball to set up a difficult run out which Van Boening completed to keep his side in the competition.

Finally it was left to Chris Melling to turn the screw and put his side on the hill as he beat Mike Dechaine 6-2 in a clash of the rookies.

Melling looked as confident as ever and his win leaves him in the running for MVP honours.

“It was unbelievable. There’s a lot of pressure and people back home don’t realise how much pressure you’re under as you have the whole continent and your friends to play for.”

Notes: Matchroom Sport are one of the world’s leading producers of televised sport and are responsible for over 1,100 hours of original programming across a range of sports. Based in the UK and chaired by charismatic founder Barry Hearn, the Mosconi Cup is one of a stable of pool events that include the World Cup of Pool and the World Pool Masters.

Mosconi Cup tables are supplied by Diamond Billiard Products, the cloth is by Simonis, balls are provided by Aramith and the Official Cue is Predator.