Appleton to the fore as Team Europe named

DARREN APPLETON$B!G(JS second successive US Open title – only the third man in history to successfully defend the biggest title in American pool – saw him move to second spot in the final European rankings and secure a second successive PartyPoker.net Mosconi Cup appearance.

He will be joined by countryman Chris Melling who has enjoyed a fabulous season, with 14 times Mosconi Cup veteran Ralf Souquet (Germany) claiming the third automatic spot. The remaining two $B!F(Jwild card$B!G(J spots go to the Dutch duo of Nick Van den Berg and Niels Feijen, who have ten Mosconi Cup appearances between them.

Following a 13 event series over 12 months taking in 12 different countries around the world, the top five players in the ranking will now reconvene at the MGM Grand in Las Vegas to defend the title they won so well in London last year.

World 10 Ball champion Huidji See gave Feijen a run for his money but came up just six points short as $B!F(JThe Terminator$B!G(Js 17th place finish in Chesapeake saw him over the line.

There are two changes from last year$B!G(Js victorious side – Melling comes in for Karl Boyes, while Feijen replaces Mika Immonen. The team will once again be captained by Dutchman Johan Ruijsink.

The PartyPoker.net Mosconi Cup is the annual Europe v America pool showdown. In existence since 1994, the event features two five-man teams doing battle in a series of singles and doubles matches over four days of compelling action.

Tickets for the Mosconi Cup are priced at $35 per day or $120 for the four day season passes and booking charges will apply. 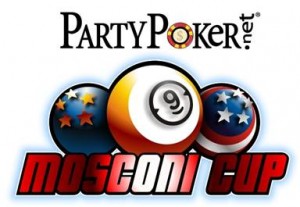