Orcullo Delivers for the Philippines! Champion of the Predator Championship 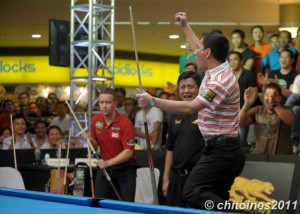 Manila, Philippines- Dennis Orcullo ended the Philippines long drought of fruitless wins when he defeated double world champion Mika Immonen in the finals of the Predator International Championship. Orcullo started the event off on bad footing when he dropped an embarrassing 9-3 loss to Japan’s Yukio Akagariyama, but won 8 consecutive matches in a row to claim the 11 years ongoing Predator crown.

The day started off with the final four players. The last westerner was Mika Immonen of Finland, alongside 2 Chinese pros in Liu Haitao and Wu Jia Qing, and last Filipino standing Dennis Orcullo. Immonen and Orcullo had to defeat their Chinese counterparts in order to stop an all Chinese finals.

Mika started off his match super strong playing fast and perfect. Before long he built a 7-3 lead. But Mika then became too cavalier in his choices going more offensively and failed to protect his lead. Liu played steady with accurate potting to climb back until he took the lead at 8-7. In the final games Immonen went back to using his more knowledgeable experience to regain the lead and out defensed Liu in the final game to receive ball in hand and run out for the 10-9 thriller.

“I was playing so well and looking at the score saying to myself how did it end up being so close?!”, said Immonen after the tight victory. That win was the third “hill-hill win by 1 game “win he had in the event. 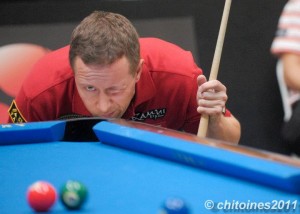 Meanwhile the heavily anticipated Orcullo versus Wu match was next. Wu had demolished all his opponents and then won a 10-9 thriller over national hero Efren Reyes. Many fans and players predicted Wu as the favorite to win the match with his abnormal offensive shotmaking skills. But Orcullo hardly gave Wu a chance to see any open shots as Orcullo ran rack after rack building a large early lead at 5-1. Though Wu did make some incredible shots, the lead lost at the start was too much to overcome and Orcullo won handily at 10-6.

Immonen took the early lead at 4-2, but both players were showing nerves as unforced errors increased. Immonen stayed ahead most of the way but Orcullo was nipping at his toes throughout. At 5-3 leading, Immonen missed an easy 4Ball which would have led to a 6-3 lead. Orcullo on the other hand missed a routine bank shot on the 1Ball, and another game missed the same bank again on the 1Ball.

At 8-8, Orcullo made a positional error leading to a mediocre safety. Immonen with a chance to play a strong defensive move instead left the shot open for Orcullo to come back with a better safety. Immonen lost the exchange and Orllo ran out and proceeded to break and run the next rack for the 10-8 win.
This would mark the second time Orcullo has won the event . The first time was in Las Vegas in 2009. He is the first Filipino to win this event twice, with Efren Reyes winning it last year.

“I wish I would’ve played with the same focus and intensity as I did against Chris Melling in the final sixteen stage. If I did, I would’ve perhaps won this match. But Dennis deserves this. He is one tough cookie,” said Immonen.

“I’m so happy to win this for the Philippines. It’s definitely a much greater feeling to win it here in Manila then when I won in Las Vegas!”, said Orcullo in his finals speech. 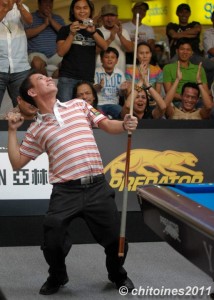 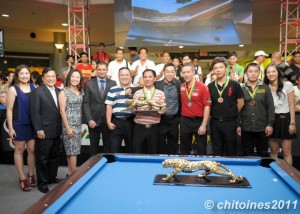 The Golden Predator Cat, symbol of the Predator Champions