More than $1 Million will be awarded at this year’s championships. 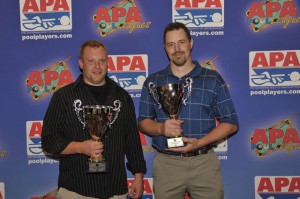 U Just Got Hoff’d from Windsor, OH

U Just Got Hoff’d took home $6,500 for their win. Tejas Winners didn’t leave empy-handed, earning $4,000 for their Runner-Up finish. 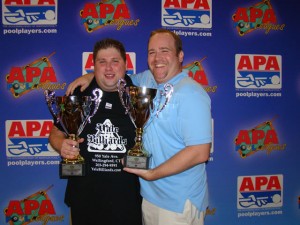 In the finals of the 9-Ball Doubles Championship, Vegas Bound – Brian Collins (SL5) and Kenneth Flowers (SL3) of Vinton, Va., was paired against Take Care Brush Ya Hair – Eric Vandervliet and Geoffrey Pryjmaczuk of Cheshire, Conn. The race was 35-31. In the end it was Take Care Brush Ya Hair earning the title and $5,000 1st Place prize. Vegas Bound didn’t go home empty handed, earning $3,000 for their Runner-Up finish.

The APA Wheelchair Challenge took center stage at the Top of the Riv on Friday evening. Charlie Hans (SL7) from Middletown, Ohio was pitted against Robert Prince Jr. (SL4) from Beltsville, Md., in the finals. The race was 5-2. Hans won the lag and continued on to win the first two games, however Prince Jr. found his groove and came back to win the next two games for the win. For his victory, Prince Jr. took home $1,700. Hans earned $800 for his Runner-Up finish. Prince Jr. was also awarded the Sportsmanship Award! The final score was 2-2. 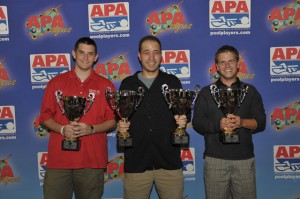 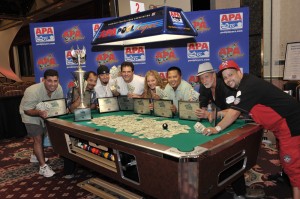 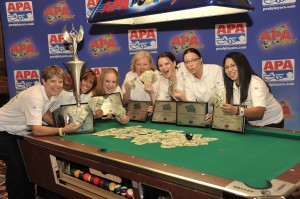 In the finals of the Ladies 8-Ball Division, Snook Hers of Arlington, Va., was paired against Queen Bee’s of Newport News, Va. Both teams were in it to win it, but in the end it was Snook Hers taking home the title! They earned $10,000 for the victory! Queen Bee’s didn’t go home empty-handed, receiving $5,000 for their Runner-Up finish. The final score was 3-1. 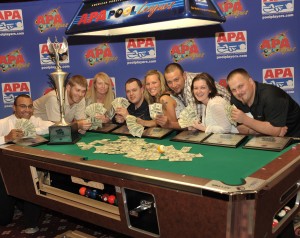 The finals of the Open 9-Ball Division featured N.J.’s Breakers of Metuchen, N.J., versus Now What of Dayton, Ohio.  Lead by a dominant performance by team captain Alex Olinger, it was Now What winning $15,000 and a national title.  The strong showing by N.J.’s Breakers in the tournament earned them a respectable Runner-up finish and a $7,000 payday.