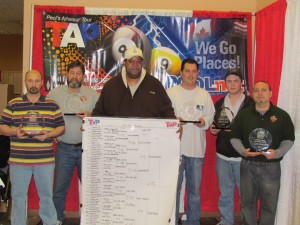 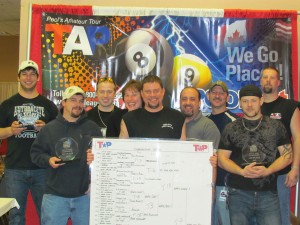 TAP, LLC celebrates 15 Years of Rally in the Valley Events!

Little River, SC, Mar. 17th, 2011 – TAP Pools Amateur Tour is about family and tradition.  TAP is also about innovation, taking the old and mixing it with the new, striving to be better, promoting the industry with sportsmanship and class, with an owner that is the key to our success because of his unbelievable foresight.  TAP has been learning from our past to take us all to a very bright future.   TAP is one team, with one goal.

In 1996, TAP’s founder and owner Loyd Schonter started the Rally in the Valley Dream Team event and concept, in conjunction with his good friend Allen Hopkins, who had the Super Billiards Expo, in Valley Forge, PA.

At that first event, less than 30 teams were there from Virginia and Maryland.   Charlie Brocklehurst, Owner of Mid-Atlantic TAP Licensee # 01, stated, “It’s hard to believe that 15 years have passed already.  I can still remember the first rally.  There were very few teams in a large convention center.  Now, we’re overflowing with players.  As one of the few territory owners who was there at the start, I can’t express enough the joy and pride I have with the TAP Members.” “Every year, they come and play with the understanding that it’s about the love of the game that binds us all together.”

Today, TAP’s Rally in the Valley event has to be limited to 144 teams through out the USA and Canada.  It now has 5 Singles Brackets, by skill level and it’s infamous midnight mini tournaments that players line up, to sign up and compete in.  Last year, it’s little brother event  Rally at  Bally’s was formed and ran in conjunction with the TAP National event, due to the popularity of this Valley Forge event.

If you ask Loyd Schonter,  What do you think when you look at the event from the first year to now, does it surprise you how it’s grown?  He will tell you he knew the event would be successful and popular, but he credits his tournament staff for making the event, one that services the player and has evolved it into what it is today.

Schonter states “Now, that we have 144 teams, we will keep it there until we make sure it is the best served event we have.  It is all about the player.  The staff I have in place can take care of it without involvement from me.  That’s what I am extremely proud of.”  “They need the deadlines we have put into place to organize and coordinate and each time, it continues to get better because of that planning time.”

TAP is proud of the event staff they have, comprised of all TAP Licensees, Operators and Representatives from throughout the USA and Canada. This hardworking, dedicated staff works long hours at these events and come back every day to do it again, but are happy to commit and dedicate themselves to each other, the corporate office and the player.

Kelly Senior, TAP Operations and Event Director stated, “Two years ago, when I came into this position, I didn’t fully appreciate as a player or an operator, what this staff truly does, today I know.”  “Throughout the planning, setup and running of the event, you tend to get caught up in the moment and in the heat of the battle, but the stress, the sleepless nights are all worth it, when you know you have brothers and sisters up there with you, not above you, not below you, but beside you who appreciate you, because we are one team, with one goal.”

“That goal, to give the TAP player the best we have to give;  organize and run an event they can appreciate, that always has them in mind.”  Senior continued, “You know you have met that goal, when a player says, “Thanks for all you do”, when they acknowledge they see it; when they respond on the TAP message board and Facebook page with more positives than negatives, and constructively tell us what they see that can be improved and their suggestion to help make it better. With each event we see it getting better and better.   “That is what makes it all worth it.”

But Senior, who is new to the crew, looks to those that have been in it for the long haul.  Bruce Williamson, TAP’s National Director and Sam Rullo, TAP’s Singles Director has been working these events for 13 to 14 years.  The balance of old school and new school coming together and reviewing each process of this team, is what makes this the successful group that it is.

Returning from the good ole days, is Chuck Schonter TAP’s Licensee Support Director. Chuck, the brother of owner Loyd Schonter, can tell many stories of the past and appreciate what TAP and this event are today.  He stated, ”  It was awesome, very well run, best I have been at , definite improvement over the years, all of you should be very proud of such an accomplishment.”

This year, additional licensees have stepped up to the plate to help and help they did.  April Bradley and staff from Upstate TAP, SC;  Charlie Brinkman L & N TAP, PA, George and Nancy Natili Route 19 TAP, PA; John Heiken Southwestern Indiana TAP;  Dan Mitchell Rock Solid TAP, ME; Carl Johnson Big Dawgs on TAP, FL;  and Cindy and Rusty Williard,  North Texas TAP with many more committing to help at future events as well.  Senior stated, “this will help us with continued success in the future, a willingness to help and be a part of our events by our licensees, operators and representatives.  You can have a first rate staff, but you always need new blood to help with breaks, on the job training for their own events and if needed potential replacements that are all ready to go.  A back up plan and team are never a bad idea.”

As a result of not only a great staff, TAP is growing at record numbers.  Territories are selling every week.  So, for the first time in history the Rally in the Valley Dream Team event sold out in Mid February.

The 144-dream team event kicked off at 8 a.m. and ran through Sunday.  TAP’s dream team event is a round robin event that goes to single elimination of Elite, Championship and Best of the Rest.  This guarantees 4 rounds of team play.

Over $100,000 in total prizes were given out at the event.  Players enjoyed 100% payback in the singles event;  open Diamond tables during their events, along with great competition of players throughout the USA and Canadian leagues representing each of their TAP territories and mixing it up with others.

As always, entry of all score sheets for team and singles events, ensures an overall solid handicap based on player performance week to week and at National competitions.  New Pool Net features were used for the planning of the event, which took manual processes and made them automated, which efficiently and effectively streamlined preparations.  Autoflag was used once again at the event, ensuring any player playing two levels above their handicap twice, is disqualified from the event.  As players are getting use to this new feature, it enables the National Director to explain to the player about this disqualification process and show them the reasoning behind it.  Taking an upset player, with politeness and professionalism showing them why such action must be taken, so they can accept it with the facts and figures.

Once again, the Predator Group was an event sponsor providing items from their Predator and Poison lines to all TAP players;  Poison Jump Cues  to each player on the Elite Bracket Dream Team various Cues  for the player prize giveaway.   Their overwhelming support of our Rally and National event has been greatly appreciated, through out the years.

On Sunday, March 13th the Champions were crowned!

Congratulations to the 2011 TAP Rally in the Valley Elite Board Champions,

Congratulations to the 2011 TAP Rally in the Valley Championship Board Winners,

Congratulations to the 2011 TAP Rally in the Valley Best of the Rest Board Winners, “D & D Misfits”; Picture not available at press time.

A complete list of team and singles winners will be posted on www.tapleague.com and on TAP, LLC Pools Amateur Tour Facebook.

In November 2011, TAP will be returning to Las Vegas, Nevada for our Nationals and hosting, RALLY AT BALLY’s.

Want more information about TAP?  Check out our website, www.tapleague.com and contact us, through our corporate office, at the Live Help desk, via email or IM.  Join the countless others that have been checking us out. We look forward to hearing from you!  Until then, TAP ON!