2011 Rally in the Valley
by Cindy Chappell

TAP League’s Rally in the Valley once again sold out with 144 teams breaking the record for the fastest sell out in the 15 year history of the tournament. Team 8 and the Magic Q’s will be representing TAP Las Vegas while competing from March 10-13 in Valley Forge, Pennsylvania. 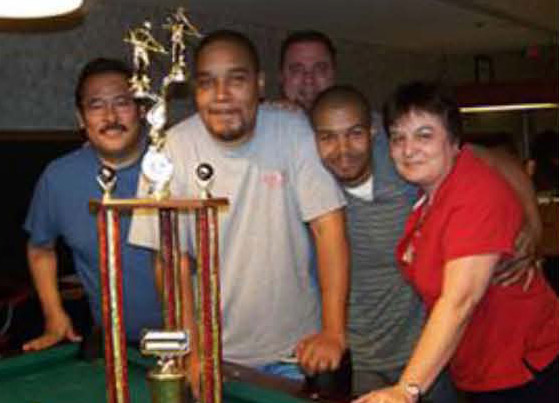 Team 8 won their entry (along with their airfare and hotel stay) in the Annual Vegas Masters 8-Ball tournament in 2010. The original players were (left to right in the photo) Chris Adlawan, Gerald Branham (captain), Carlo Butto, Jeremy Head and Lucy Hernandez. The team added Reese Romney, Kelly Seeley and I to the roster to allow them additional strategic maneuverability during the tournament.

The tournament is held inside the Allen Hopkins Super Billiards Expo in Valley Forge, Pennsylvania every March on all Diamond tables. Each year players in TAP League form teams from players all over the United States and Canada to compete in the Dream Team Tournament. TAP also offers players the opportunity to compete in singles in their skill bracket and mini-singles and Scotch Doubles tournaments.

This is the 19th Annual Allen Hopkins Super Billiards Expo where they host both pro tournaments and amateur tournaments, such as, Open 10-Ball Professionals Championship, Pro-Am, Women’s, Seniors and many more. Just walk around the event and you are likely to bump into Mike Massey, Jeanette Lee, Allison Fisher and many more. The expo itself is said to be the “largest consumer-oriented trade show in the industry” with over 100,000 square feet on 2 floors! It is held in March every year, so if you missed it this year, join us in 2012!

Rally Rosters and other cool links!

Posted in PoolNet for those of you who would like to view the competition. Select Organization “Rally in the Valley 2011” and Division “8-Ball Teams.”

The event starts with a round robin tournament followed by a single elimination tournament. Click here to see the round robin groups on the TAP message board. This is also where all other event information is posted and allows for interactive discussions with TAP’s staff and other players. Team 8 is in Group 20 and Magic Q’s is in Group 26.