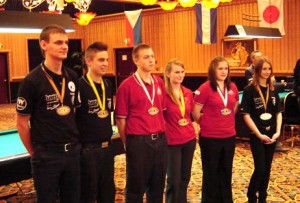 The United States was host to the XIX World Pool-Billiard Association (WPA) World Junior 9-Ball Championships on November 29th – December 1st. Junior billiard champions 19 years or younger traveled from around the globe to Reno, Nevada to compete for the world titles in both the boys’ and girls’ divisions. Twenty different countries from six continents were represented, and at the end of the tournament, North America dominated the girls’ division with a gold and silver medal, while the boys’ division claimed a silver medal. The United States Pool Players Association (USPPA) and Rail Bird Project produced this prestigious junior event alongside the WPA World Wheelchair 9-Ball Championships at the Peppermill Resort.

The feature story this year was Brittany Bryant of Canada winning her second gold medal and crowned the 2010 WPA World Junior 9-Ball Champion of the girls’ division. Bryant began strong, winning her match against Hee-Joo Kang of South Korea 7-4 and  then defeated the 2009 WPA World Junior 9-Ball Champion Keng Chun Lin of Taipei 7-5. Bryant later bested Jauslinn Arnold of the US 7-3 before facing Briana Miller of the US to compete for a guaranteed position to play in the finals.

Meanwhile, Briana Miller, the determined 15 year old from Pennsylvania, made her way through the winner’s bracket by edging ahead of long time rival Samia Konishi of Japan 7-6. Then, Miller defeated Simone Kuenzl of Germany 7-3 and also won a thrilling match 7-6 after trailing by 4 games against Karen Garcia of Nicaragua.

With Bryant and Miller the only two standing in the winner’s bracket, the fierce Miller sent Bryant to the one-loss bracket by winning handily 7-3. Bryant was anxious for another chance to play Miller in the finals and made quick work in the semi-final match against Anastasia Nechaeva of Russia by winning 7-1. In the one set finals match, the swift shooting style of Miller was put to a halt when at six games each, Bryant won three consecutive games, giving Bryant the match win 9-6 and the world title. Miller took the well deserved silver medal.

Also representing the United States in the 16 player girls’ division was BEF Junior National Champion Liz Lovely and Jauslinn Arnold. Arnold won two thrilling 7-6 matches against Zhi-Ting Wu of Taipei and Natalia Seroshtan of Russia before losing to Bryant and Nechaeva. Arnold finished in a strong tie for fifth place, while Lovely finished tied for thirteenth.

In the boys’ division, Jesse Engel of the US stormed through the winner’s bracket with victories over Manuel Ederer of Germany 9-4, Ryan Spence of Canada 9-3 and Marcos Garcia of Nicaragua 9-5. Engel then faced the defending champion Ruslan Chinahov of Russia, winning 9-6 and later sent Francisco Ruiz-Sanchez of Spain to the one-loss bracket in a close match 9-7. Engle was now the only undefeated player and only one match away from the title.

In the semi-final match, Sanchez shattered any hope that former champion Chinahov had to defend his title, by winning decisively 9-1. Sanchez then charged ahead for a rematch with Engel. The final match was filled with excitement as the two boys were competing for one of the most prestigious titles of their career. In the end, with a final score of 11-6, Sanchez would be the one accepting the gold medal and crowned 2010 WPA World Junior 9-Ball Champion. Engel took honors to become the “2010 Silver Medalist.”

The Billiard Congress of America (BCA), as the North American member to the WPA provides the opportunity for juniors to compete in the WPA World Junior9-Ball Championships.

Formed in 1987, the World Pool-Billiard Association (WPA) is the international governing body for pocket billiards. For more information, visit www.wpa-pool.com.

Founded in 1948, the Billiard Congress of America (BCA) is a non-profit trade organization dedicated to growing a united, prosperous and highly regarded billiard industry through BCA leadership. For more information, visit www.bca-pool.com.

The Billiard Education Foundation (BEF) was formed in 1993 as a 501(c) (3) non-profit charitable organization and is committed to the growth and promotion of billiards among youth. The BEF supports youth billiard programs by funding academic scholarships, produces the Junior National 9-Ball Championships and sponsors billiard athletes to attend the WPA World Junior 9-Ball Championships. The BEF encourages youth to stay in school and further their education while building and maintaining a lifelong love of billiards through the “Pool In School” program, which promotes billiard clubs, teams and billiards as part of the physical education “Lifetime Sports” class. For more information, visit www.BilliardEducation.org or call 303.926.1039.