The Billiard Congress of America held the annual Hall of Fame inductions Thursday night at the Marriot Hotel in Chesapeake in conjunction with the US Open 9-Ball Championships. Francisco Bustamante was inducted in the Greatest Player category and Larry Hubbart and Terry Bell were inducted in the Meritorious Service category for their efforts in creating and building the APA 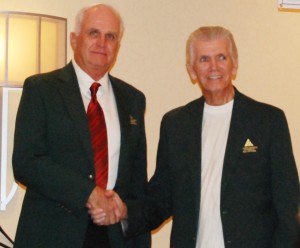 This was an emotional evening as Efren Reyes and Alex Pagulayan introduced their countryman into the elite club and Renee Lyle did the same for Bell and Hubbart. Videos gave highlights of the careers of these gentlemen and standing ovations were offered as long and loud tributes to the accomplishments of these three greats of the game. 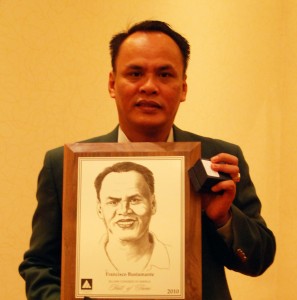 During Bustamante’s introduction his career and the many big wins, including the recent World Pool Championship were recalled while Bell and Hubbart were lauded for not only awarding more than 20 million dollars in prize money over the years but also for the industry sales of cues and tables that have been generated by the desires of their players to own their own equipment.

AZBilliards wants to tip their hat to the efforts of Mike Panozzo of Billiard’s Digest and his team for orchestrating the evening as well as to Barry Behrman for providing the venue and the time off from the US Open to make the evening possible.

Congratulations to our inductees. The honors given to them tonight are an inspiration to others to follow their lead.
By AzB Staff – 2010-10-21